Located in the heart of Lisbon, in the emblematic railway station of Rossio, this project was designed for Uniplaces, a young, international, dynamic company that operates in the global student housing market.
We stipulated two lines of action: one concerning the space occupation strategy, geared toward maximising work performance, and another concerning the space’s character, as regards its ability to represent the company’s values and culture and its integration in the surrounding architectural environment.

In terms of functionality of the office areas, it was our understanding that an open-space environment would best suit Uniplaces. Communication between the various company departments is enhanced by creating a work space with as few partitions as possible. A balance in the relationship between the individual and the collective is attained by creating spaces for contemplation within the open-space. Therefore, small-scale spaces are strategically distributed, be it through fixed elements, such as the library and semi-open meeting rooms, or through movable furniture, such as the small structures intended for making Skype calls.

One of the major challenges for companies of this kind (start-ups) is the exponential and sudden spurt in headcount. For this reason, the space’s evolution-friendly structure and the ability of certain functional areas to adapt to different programmes (leisure versus work space) were a fundamental aspect in the project’s design.

We also took into consideration that this office would be serving itinerant employees. Work space is not limited to a desk, but encompasses the whole of the supplementary areas intended for relaxation and leisure. The goal was to stimulate communication and interaction between employees and to make the work-day less tiring through a change in setting and the created dynamic.

As regards the space’s character, we propose Uniplaces’ identity be communicated through the creation of a daring environment that is both young, but above all welcoming. As a result, we created static spaces, such as the living room, greenhouse, reading corner (library), together with dynamic systems that are both innovative and challenging in the experience their use provides, such as in the horizontal extension of the mezzanine with a suspended net structure.

In addition, we sought to architecturally interconnect the office space with the surrounding context. The building of the Rossio railway station, where the offices are located, is one of the great examples of the neo-Manueline style. This style is strongly evocative of the great voyages of the Discoveries. Elements such as ship ropes and armillary spheres mark the facade. Drawing on that, we have used rope netting as an architectural material in various office areas. The netting, given its ephemeral character, communicates the young and dynamic environment intended.

Lastly, in order to emphasize the romanticism associated with this building, we propose a greenhouse be created at the heart of the office. This light-filled nook contextualises the stone masonry of the imposing arcs and becomes the main visual bridge to the adjacent exterior urban square. 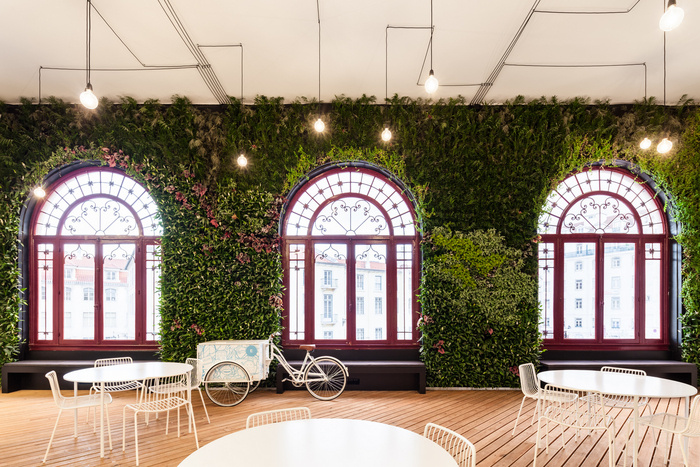 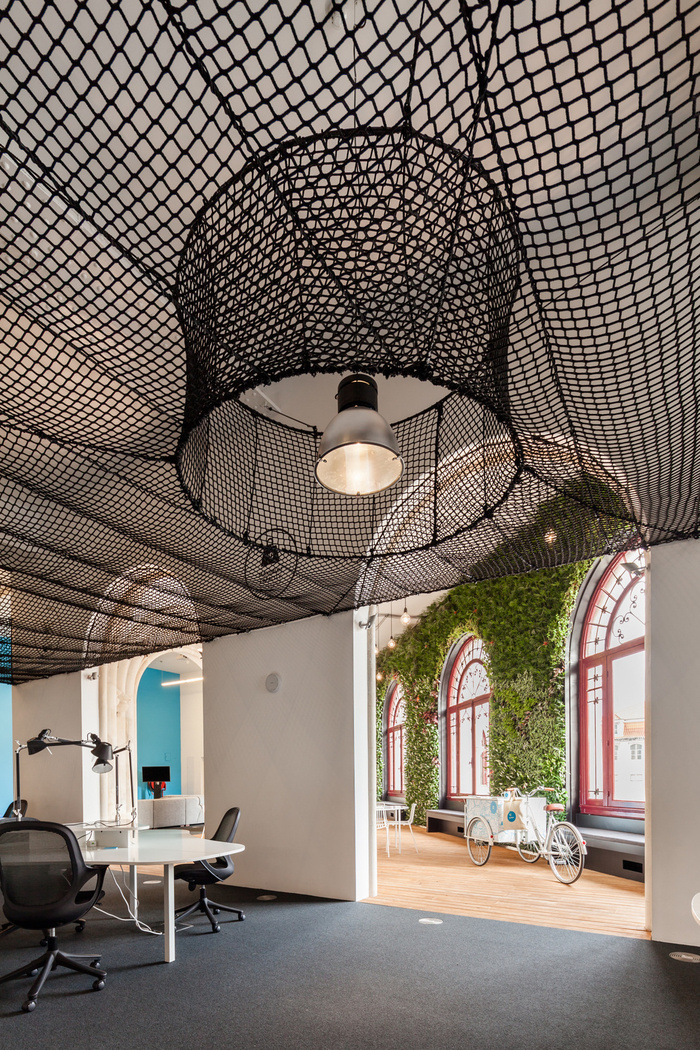 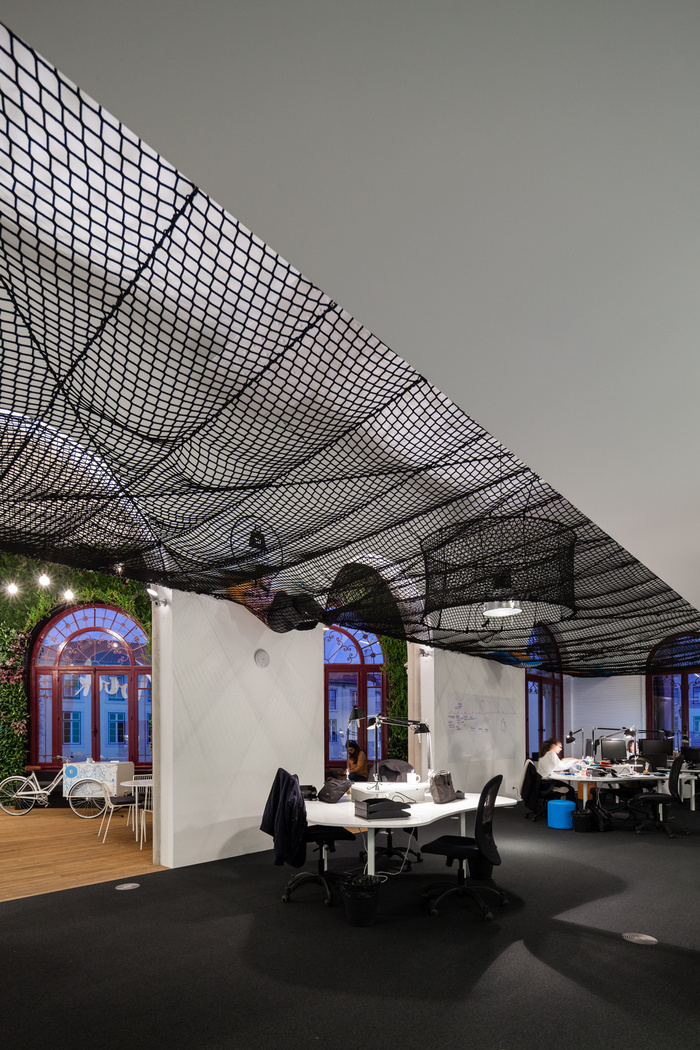 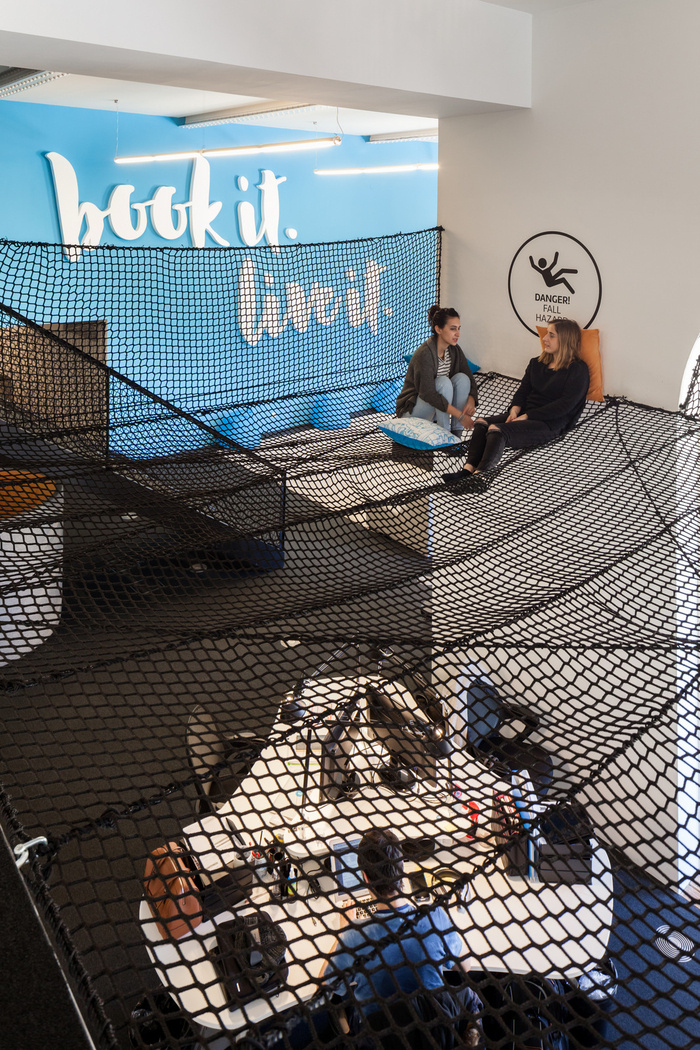 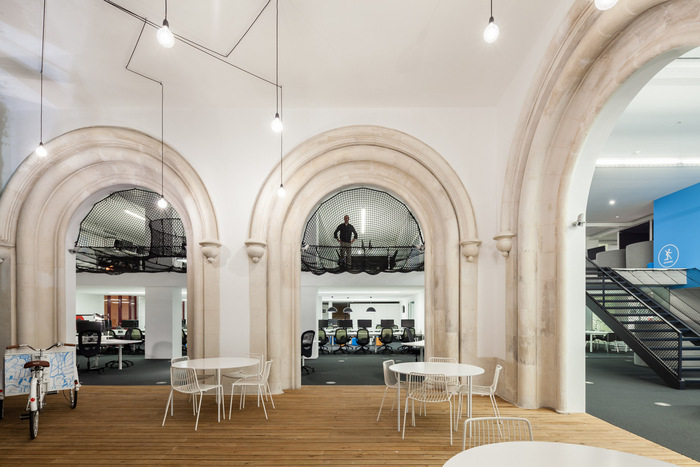 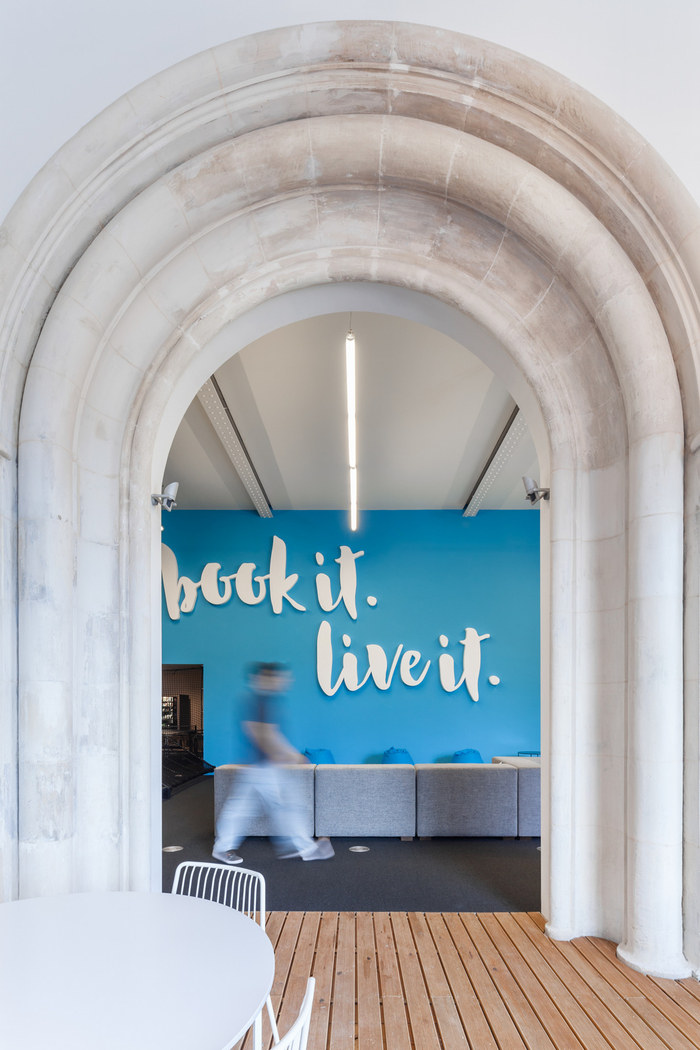 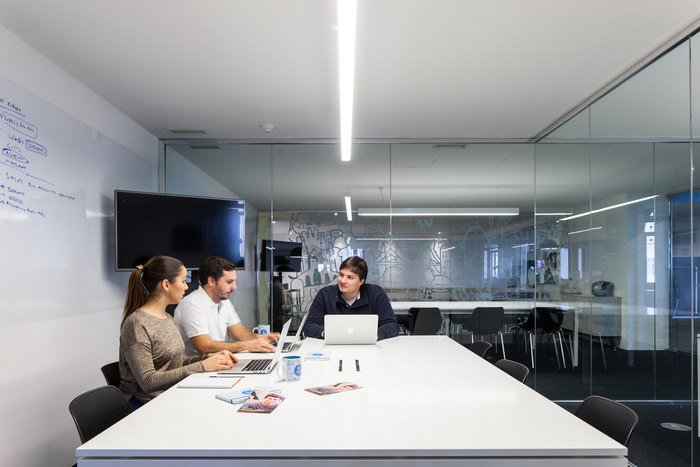 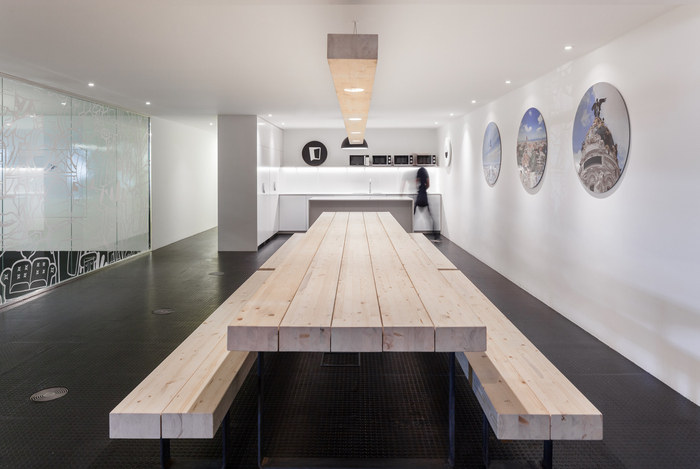 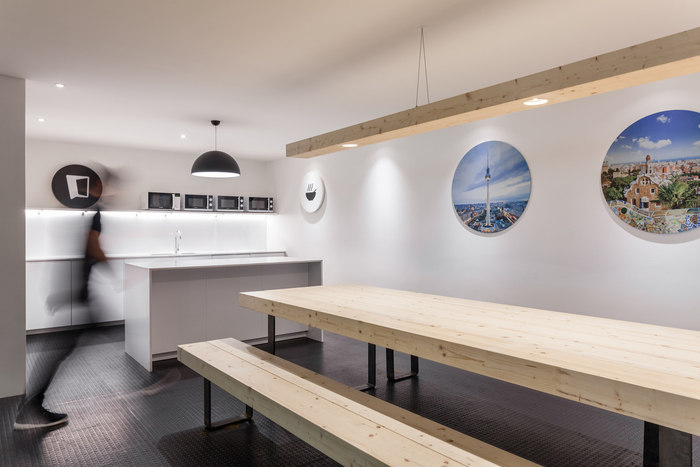 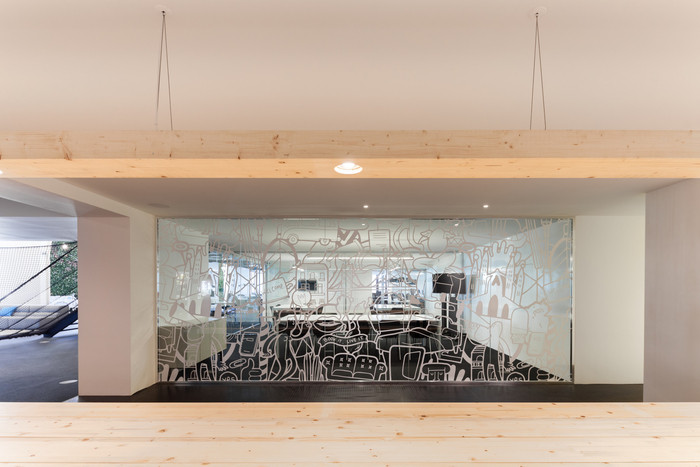 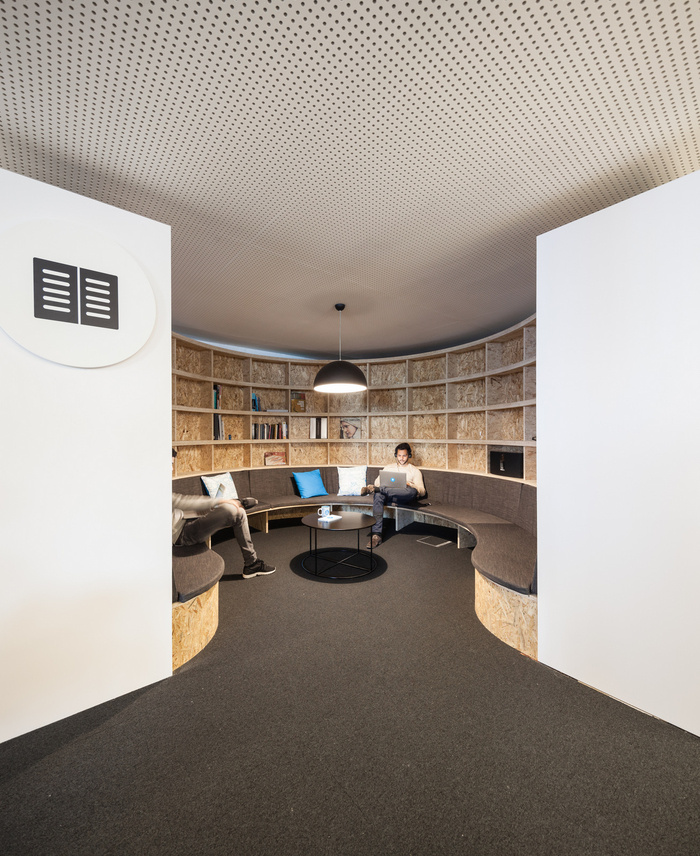 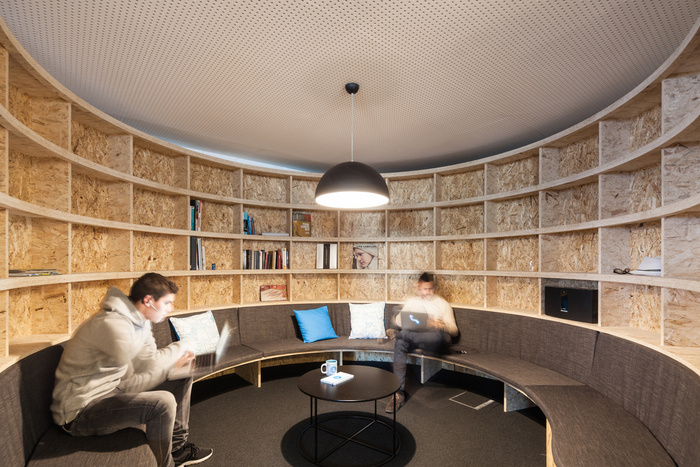 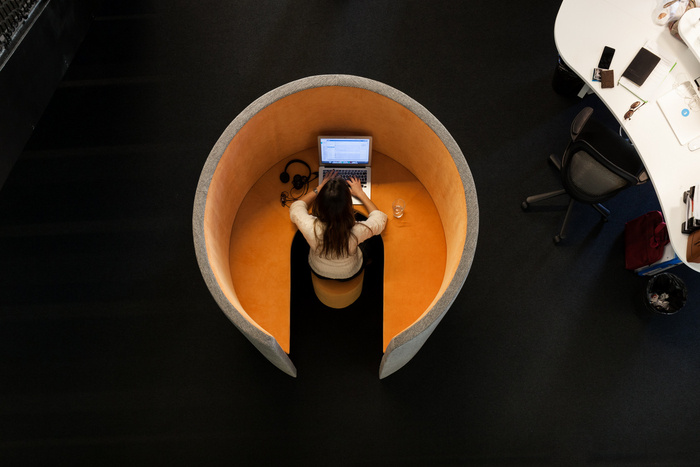