Celebrating a rich history in the Bay Area with roots dating back to the 1890’s, the “Coblentz” era of this San Francisco based law firm began in the 1950’s. As a recognized force within the regional real estate environment, Bill Coblentz joined the firm that would one day bear his name and continued to develop the firm’s successful local reputation. As the decades progressed, clients included notable figures such as the Hearst family during the Patty Hearst kidnapping, legendary San Francisco concert promoter Bill Graham, and the estate of Elvis Presley.

Throughout the second half of the 20th century, the firm continued to grow its prestigious real estate practice, prompting a move into San Francisco’s Ferry Building. This architectural icon well represented Coblentz’s rich history and established position in the Bay Area. However, as the firm continued to experience internal growth, this proved to be a challenging space for the efficient planning and densification the firm required.

Coblentz hired our design team in late 2014 to assist them with the programming and planning of recently acquired office space in the city’s Financial District. Their newly leased space was nearly a 1/3rd less of what they had occupied in the Ferry Building, but allowed for more efficient use of space planning. The three high-rise office building floors, 30th, 29th, and a partial 28th, were also a large departure from the atypical office space they had resided in for the last fifteen years.

This reduction in space resulted in planning challenges, but also provided an opportunity for Coblentz to dissect their ways of working and prioritize their needs. The multi-generational design committee desired a space that would reflect the local culture, make their clients feel welcome, celebrate their history, embrace the future, and be appealing to new talent. The firm adopted a single-office-size strategy that speaks to their democratic culture, and allowed for welcoming social spaces that everyone can enjoy. Rather than assigning corner offices to partners, these were designed as informal meeting spaces. The conference center and café / library space are linked with a dramatic interconnecting stair that provides opportunities for clients, attorneys, and staff to mingle, collaborate, and simply run into each other for impromptu conversation.

Upon first entering the space, visitors are immediately enveloped by a dark elevator lobby with linear lighting that directs focus towards a brightly lit reception area. A folded vertical element behind the reception desk becomes a ceiling feature that travels across the internal meeting spaces and links the reception area with an elegant connecting stair and panoramic views of the Bay Area. The screen behind the stair speaks to the folded ceiling plane in a two dimensional fashion while creating a natural divider between zones of circulation and a series of multi-purpose rooms. These large meeting spaces can serve as both formal client conference rooms, yet support the large all-hands internal meetings that promotes the culture in which Coblentz prides itself.

The design team’s proposed white, gray, and black palette serves as a neutral backdrop for their vast collection of artwork and provides for the dramatic lighting opportunities. The color scheme not only portrayed a literal contrast, but a symbolic shift from the more traditional legal environment they had recently left at the Ferry Building. This fueled the mindset that Coblentz, Patch, Duffy, & Bass were once again looking towards the future and reinventing themselves for the next generation of legal professionals. 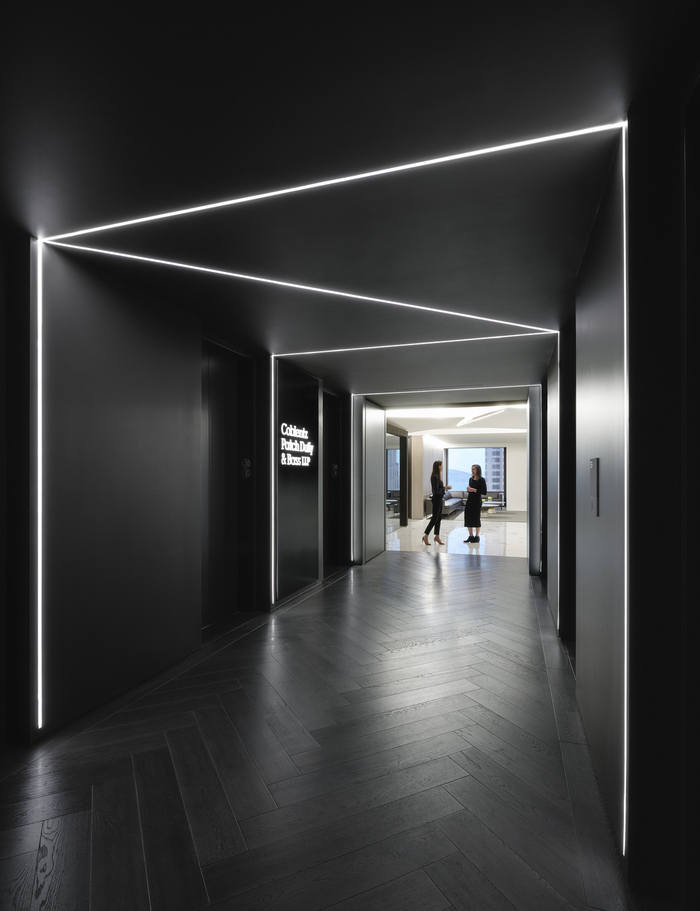 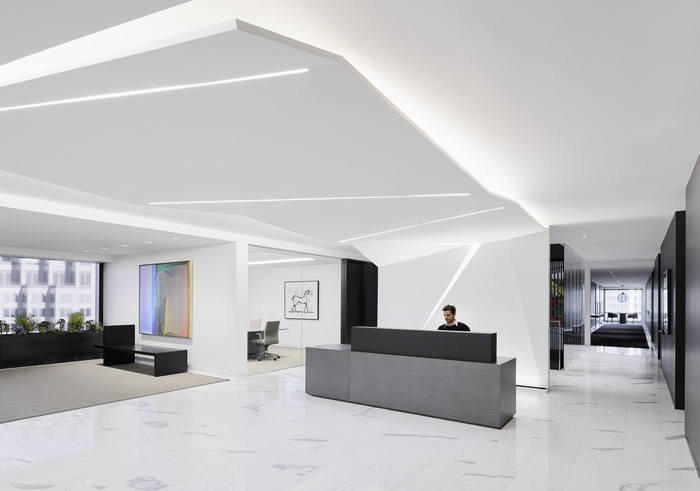 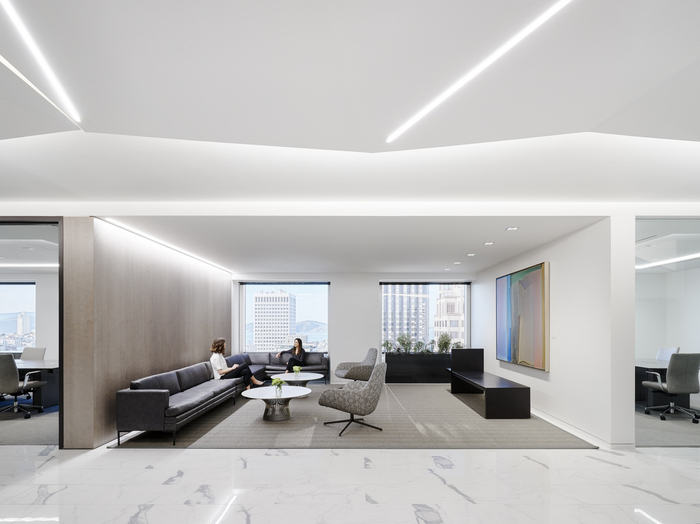 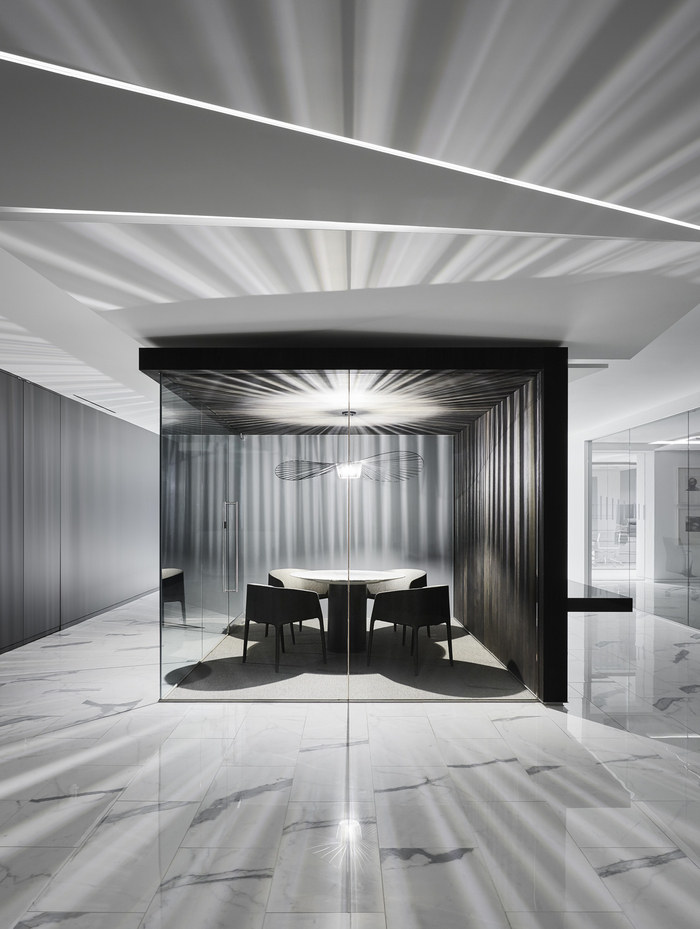 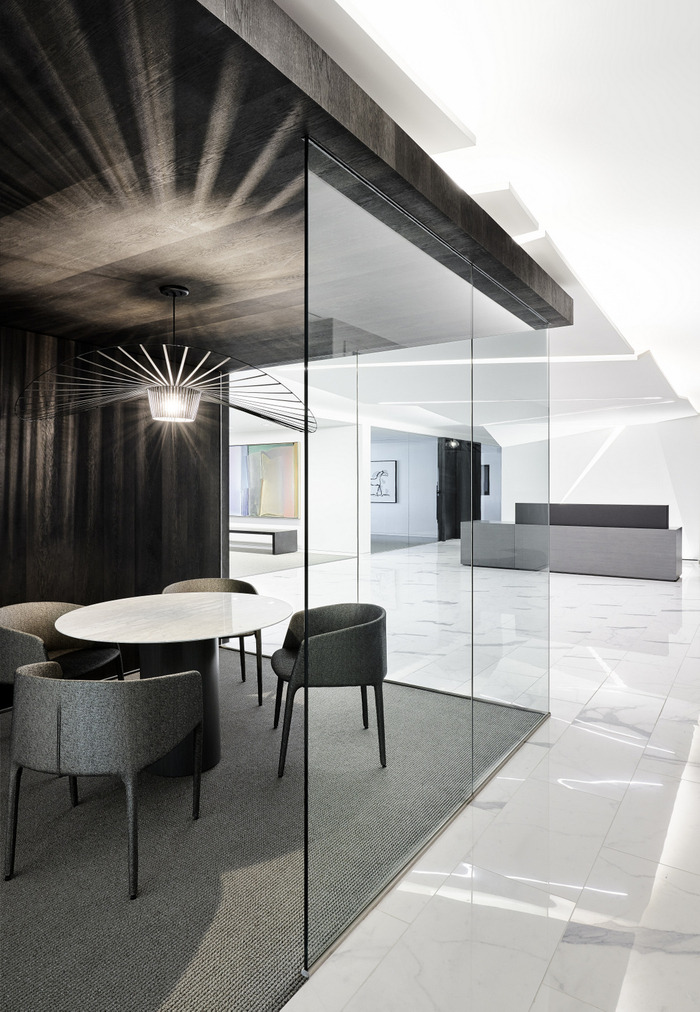 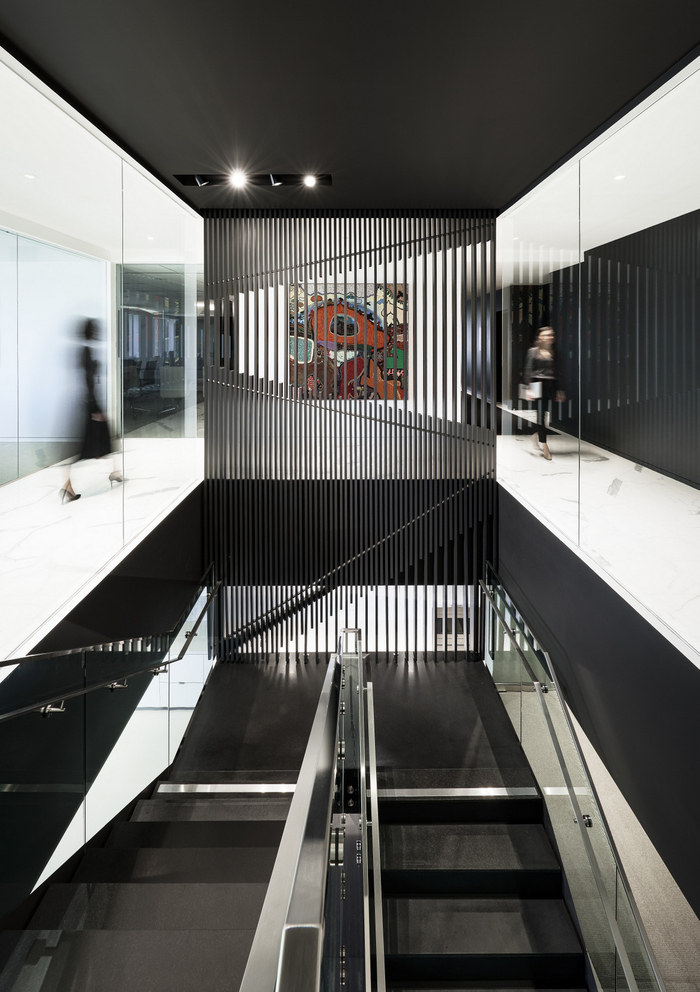 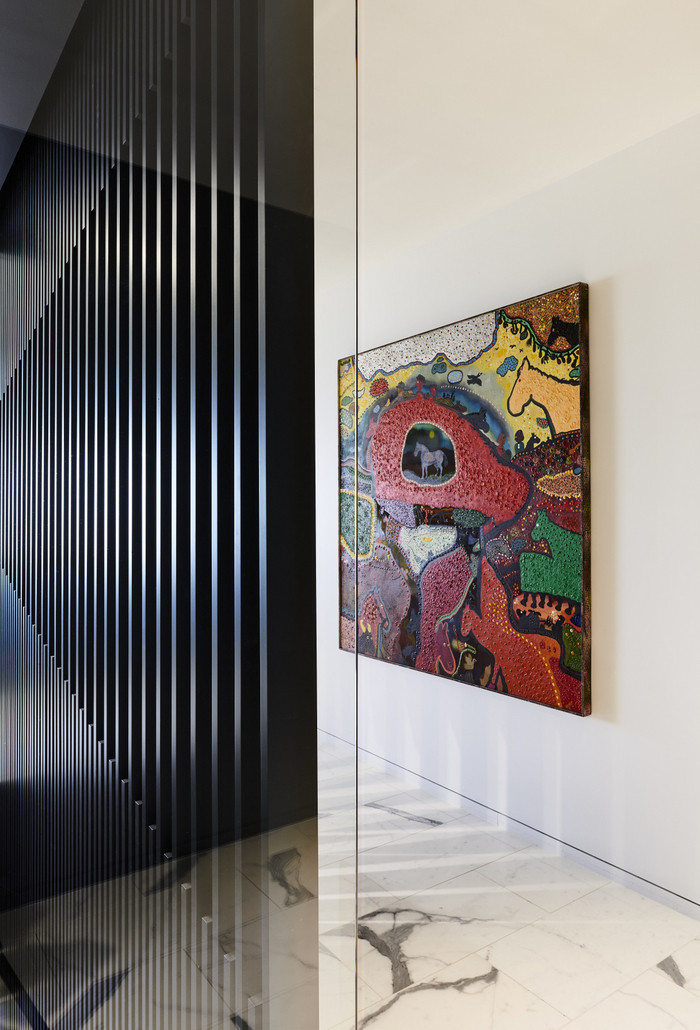 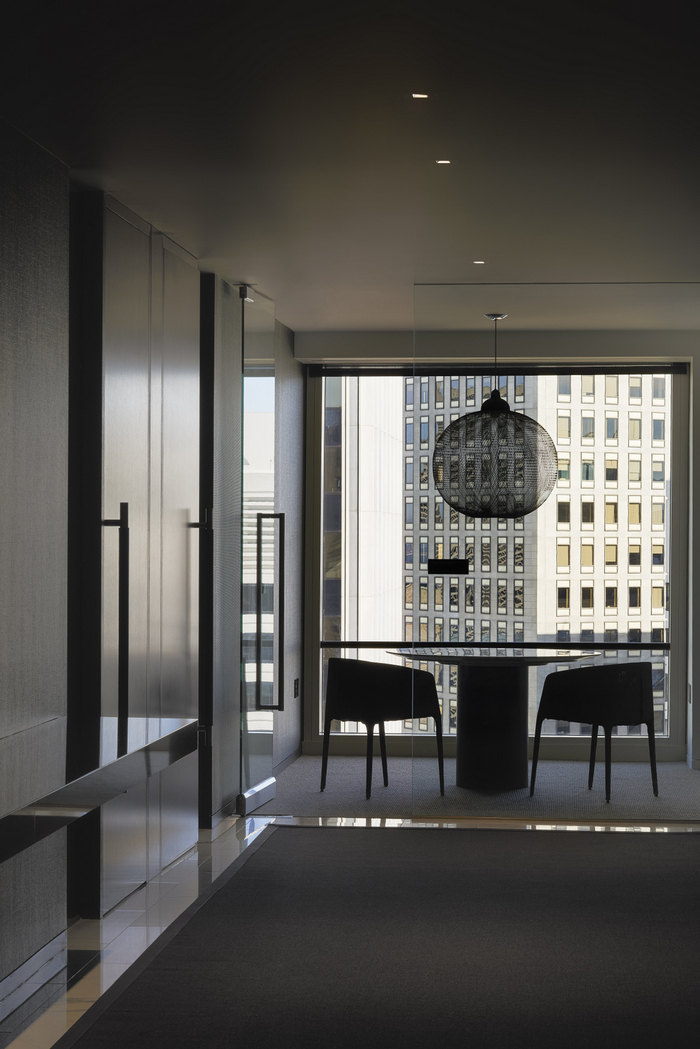 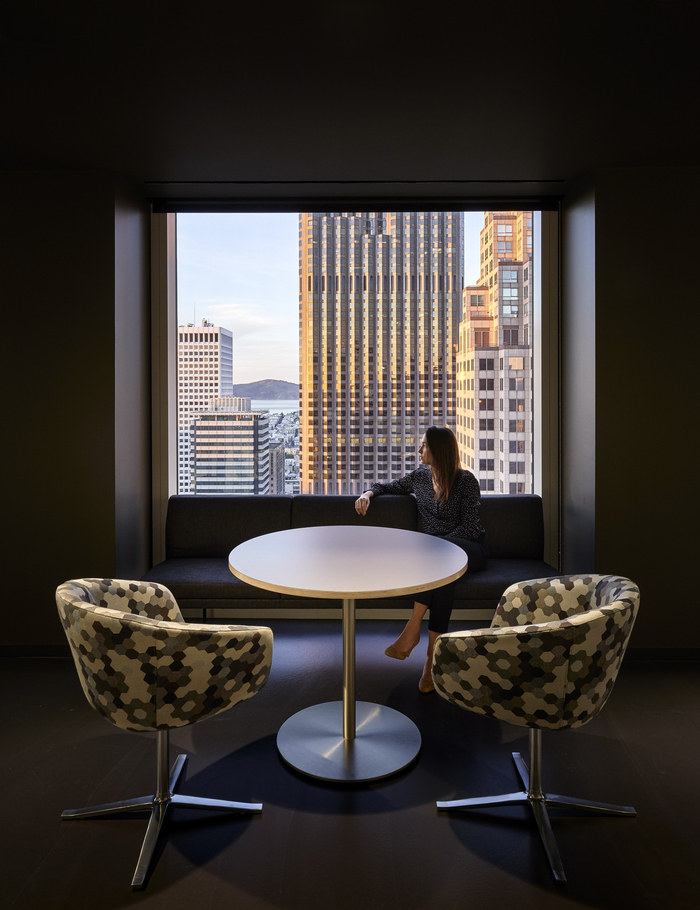