When commissioned by Gruppo Campari to design their new Toronto office, our brief was simple – ‘create a space which captures the spirit of the company and inspires the people who use it’.

To achieve this mandate we looked to the past to inform the future. Initially captivated by Campari’s iconic posters – particularly those designed by Italian Futurist’s Fortunato Depero and Bruno Munari – we quickly found ourselves immersed within a rich archive of creative collaborations spanning over 100 years. The other aspect of the brand which fascinated us was the secret recipe which makes up Campari – which to this day only a handful of people know. And its from these two divergent ideas that we looked to distill a singular idea.

The overarching approach to our design was less about a concept/vision and more about a process of collage. In order to pay homage to Campari’s rich social and cultural history, we abstracted colors, patterns, textures and shapes from the posters and the ingredients – layering them over one another until we achieved a balanced three dimensional canvas.

The transition from brand to space was quite fluid and organic as every decision we made was filtered through the lens of bold, vibrant and experimental – bold architecture, vibrant colours + textures, and experimental material applications. For both us and the client the end goal was an inspirational space.

As per the plans and photos, the office is essentially comprised of 3 primary spaces – entrance/vestibule, workspace/mezzanine, washroom/utility.

Our primary focus when planning was exploiting the large open area and high ceilings of the main space in order to create both public and private spaces. Inspired by Fortunato Depero’s 1928 poster titled ‘He Distractedly Put the Bitter Campari on His Head’ we wanted our architectural volumes to float within our canvas. The enclosed offices and boardrooms can be circulated around as opposed to pushed up against walls. And the upper mezzanine provides public space away from the primary work spaces

Given the history of the existing building, we encountered many challenges, however the most pressing was the lack of natural light. The space itself has no windows to the exterior and initially had no skylights – those were added during the design and construction process. And to get natural light into the private offices and boardrooms we ended up using 1.5″ polycarbonate sheets to create partitions. This allowed for soft diffused light into spaces which otherwise would have been dark.

This project is all about materials and colour. We used Johnsonite rubber flooring throughout the whole space to define zones. We used Gallina polycarbonate sheets to create translucent partitions. We used Abet Laminati for all of our custom millwork – the Bacterio Pattern designed by Ettore Sottsass reminded us of the cochineal insect which was traditionally used to colour Campari red. We used laser cut white ash plywood to add warmth to the space – the pattern is derived from another Camapri ingredient which is the cascarilla leaf and is intended to help with acoustics. And lastly white and grey paint to balance the vibrancy of the aforementioned. 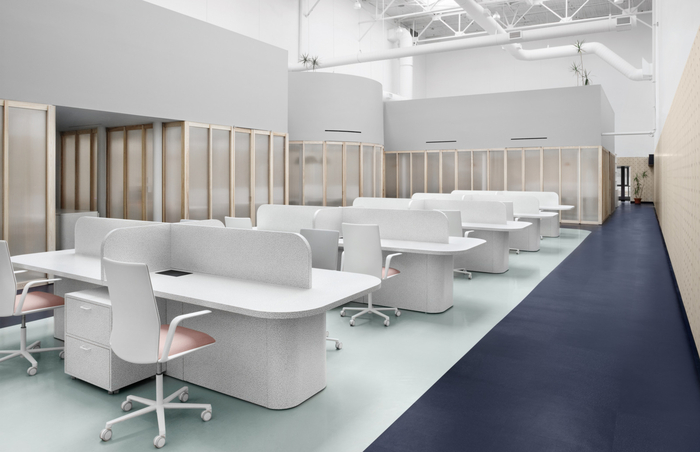 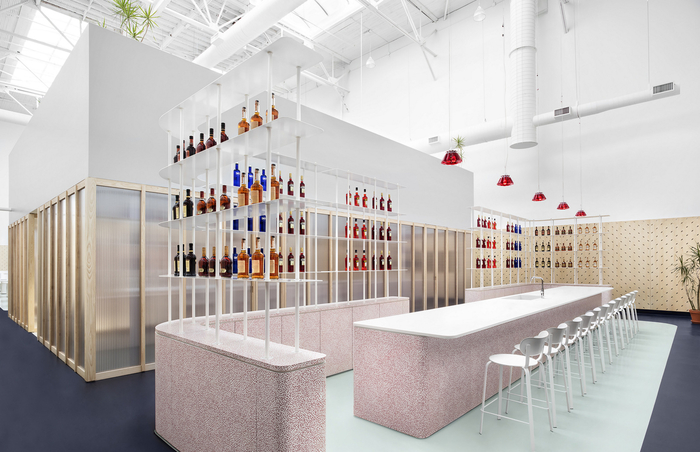