BDG architecture + design has collaborated with Matheson Whiteley to develop the new headquarters for Ogilvy Group UK located in London.

The new landmark headquarters for Ogilvy Group UK have been completed, designed in an innovative collaborative venture between BDG and Matheson Whiteley to deliver a truly unique response to a client brief, the end result is a fresh vision for workplace architecture of the future. The 20,000 sq m workplace, located within Sea Containers, occupies a prominent location on the river Thames in London, between Tate Modern and the Oxo Tower.

Armed with future-proof technologies, the workplace delivers a cultural shift for the 1,700 Ogilvy staff – and 700 working for WPP sister company MEC who are co-located within the building – to encourage a dramatic flexible working and collaboration between different parts of the organisation.

The building itself is complex, presenting significant space-planning challenges. The result, a successful collaboration between landlord, client, design team, contractor, catering supplier and other consultants, is an inspirational workplace that makes maximum use of London’s best views while providing the perfect environment to support Ogilvy’s future growth and success.

The space is arranged around a series of structural interventions within the existing building. These create vistas, platforms and connections between different groups and departments, while providing alternative places to work. Nearly half the usable floor area is given over to shared space and facilities, supporting a future of work which is increasingly informal, flexible and connected.

By concentrating workspace on the lower parts of the building, the upper two floors are dedicated to shared and hospitality functions, including a cafe/bar, bistro, private dining, 200-person double-height amphitheater and new roof terrace.

Radical Remodelling
Radical remodelling was required to the middle zone floors 6 – 11, to alleviate the effects of low ceiling heights and deep floorplates. In the final design, Ogilvy took the uppermost three floors in this block (levels 9, 10 and 11) while WPP sister company MEC occupied the lower three floors (6, 7 and 8).

BDG/MW appreciated that cutting large openings into the concrete floor slabs within this middle zone of floors would open up spaces and alleviate the oppressive atmosphere created by the low ceilings.

These openings would also create much-needed new opportunities for vertical circulation within this dynamic building. A critical initiative was to divide the three storey zone from floors 9 to 11 into three distinct vertical ‘stacks’, each occupying one-third of the width of the building, known as the west, central and east stacks. This created a grid of nine spaces, creating a series of manageable ‘humanised’ volumes of space.

BDG/MW then treated the workplace in terms of city planning, with a collection of neighbourhoods connected by common spaces. Each self-contained neighbourhood would contain an Ogilvy Group company, while the common areas would support flexible working, collaboration and circulation.

Central Stack and slow connections
Inspired by ideas of landscape design, BDG/MW conceived of the central stack as a series of gently cascading terraces, suspended platforms and wide stairways, creating an ‘undulating landscape’ that connects floors while creating a ‘collaborative nucleus’ for the building.

This also creates a series of long diagonal vistas through the building and over the Thames, while also generating double and triple-height volumes, completely obviating any sense of claustrophobia that may have been caused by the low ceiling heights. These long views through the space were also about encouraging people to adapt to flexible working by making the facilities highly visible.

The entire central stack of space on these three floors is designated as shared space ‘common areas’ containing the ‘slow’ connections between floors as well as supporting various flexible working activities ranging from solo touchdown spaces to large meeting rooms.

East and West stacks and fast connections
The east and west stacks provide the self-contained workspaces for the different Ogilvy Group brands, with their own ‘front doors’, buffered by the central stack. ‘Fast’ connections within these east and west stacks allow rapid access between floors and the possibility for an Ogilvy Group brand with greater spatial requirements to occupy more than one floor with its own internal vertical connections. This created a large variety of different spaces, which helped determine which company went where.

These ‘fast’ stairs were assembled on site due to access constraints from upper ground and access within the building – low ceilings, dense columns and no crane access on-site. Different in design (including spiral and scissor stairs) but from the same family in terms of materials and details, each staircase brings character to the space and the timber treads provide a warm and natural feel with acoustic qualities.
The overall result was the ability to create a large variety of spaces available for the different Ogilvy Group companies, which vary significantly in size and activity, all connected by a central shared zone. 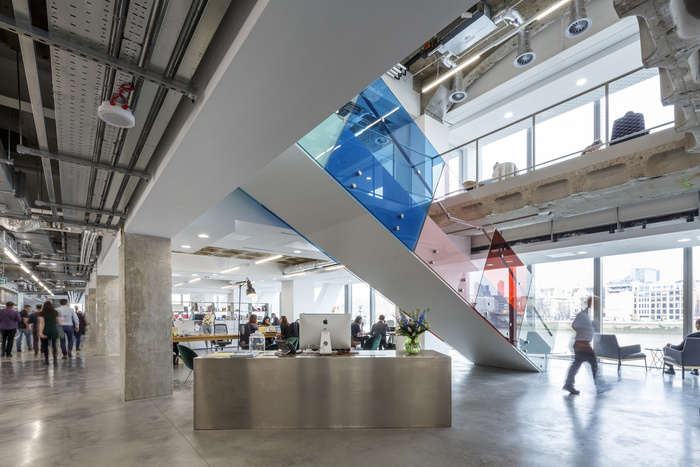 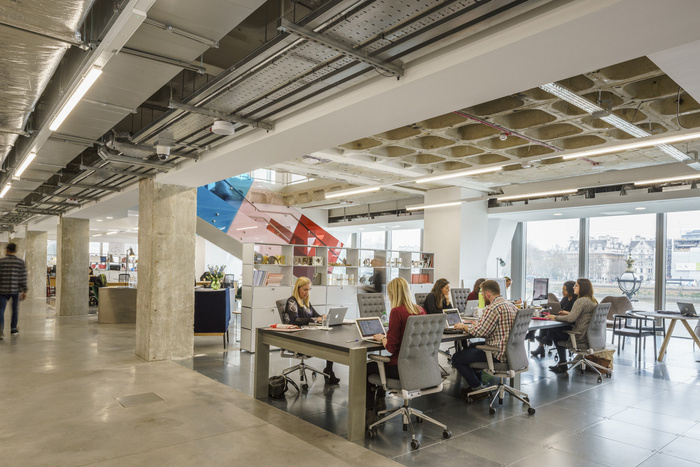 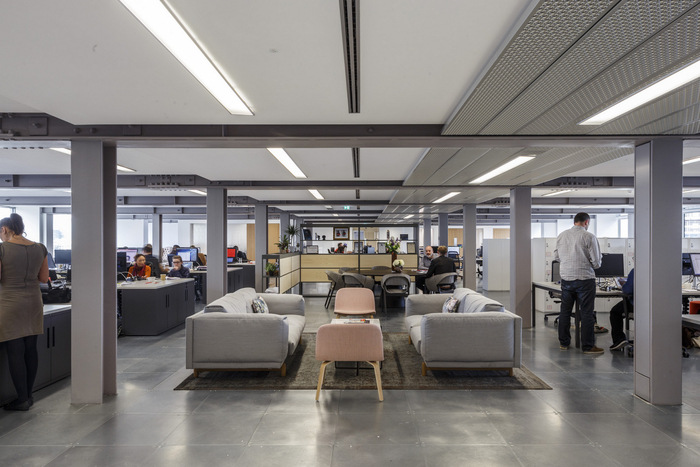 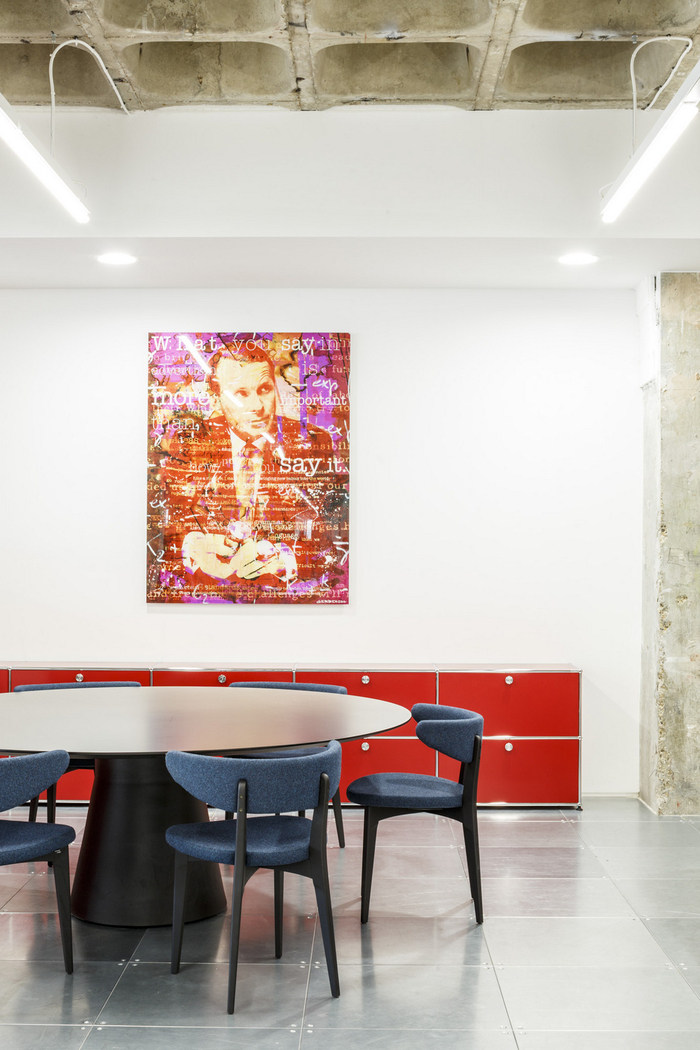 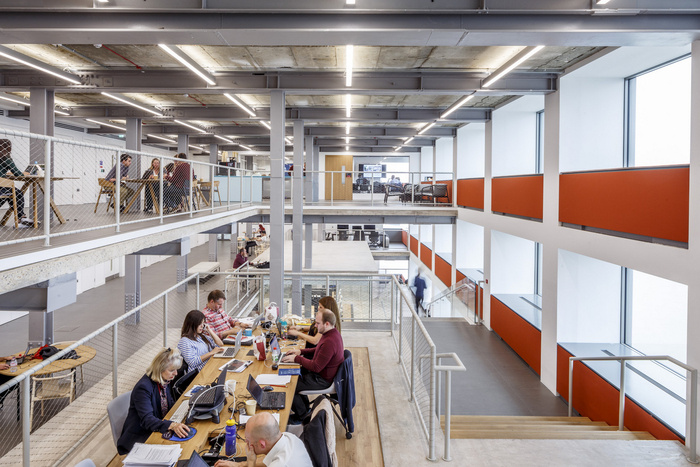 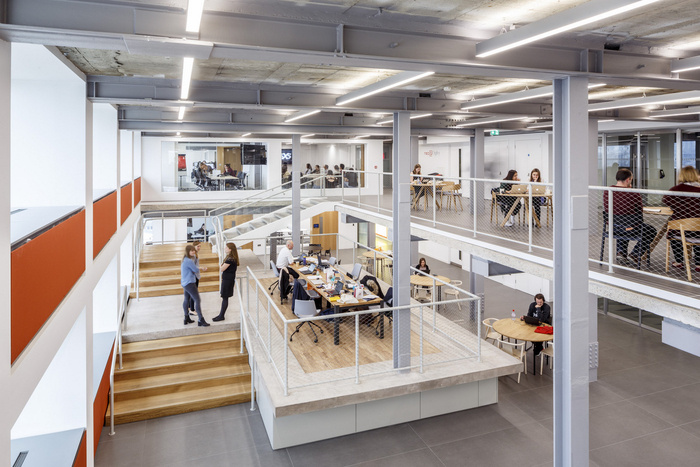 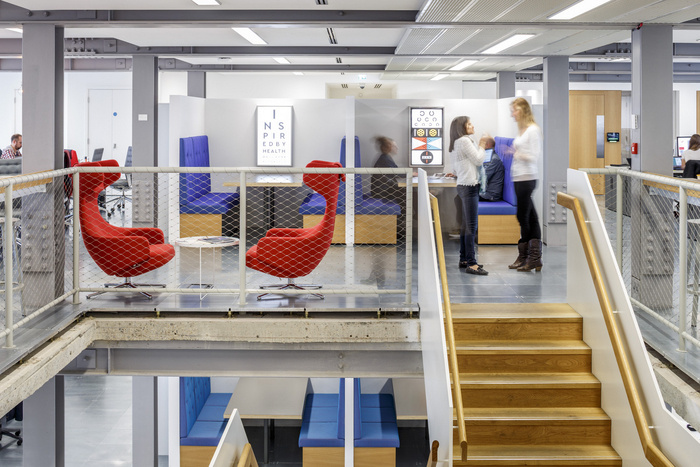 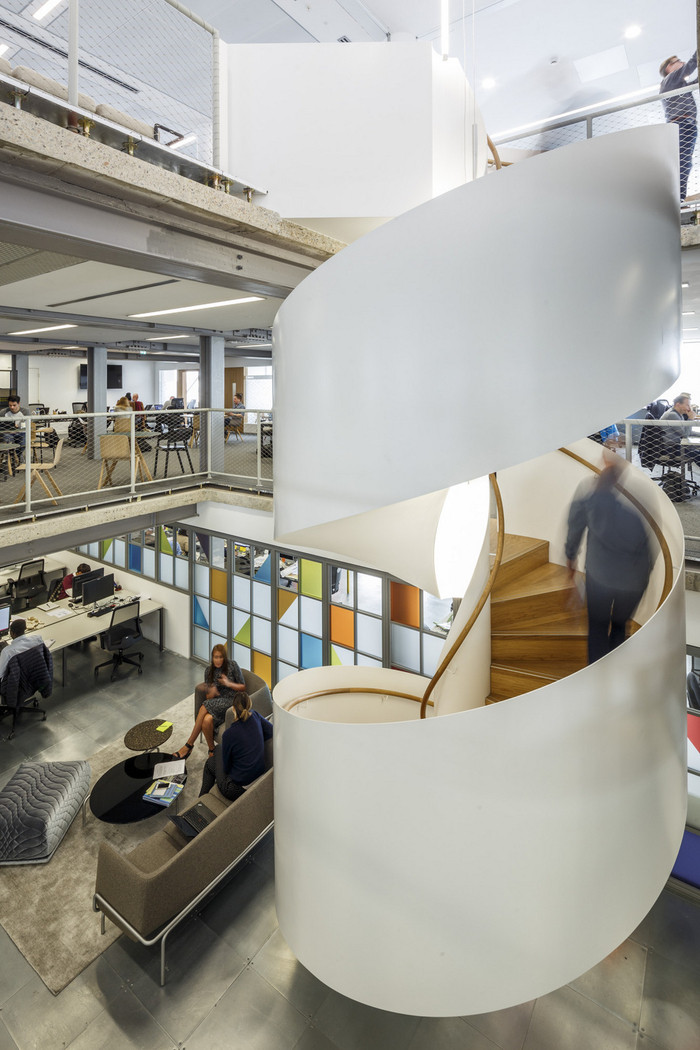 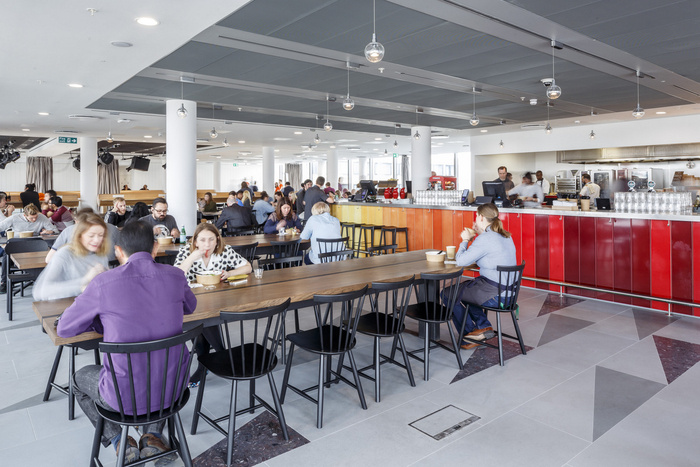 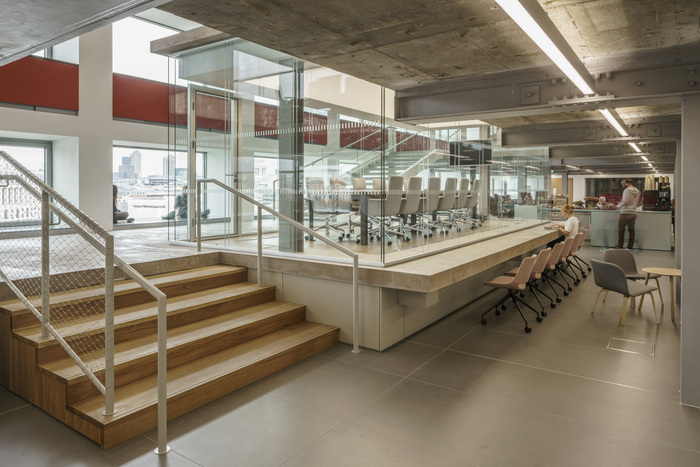 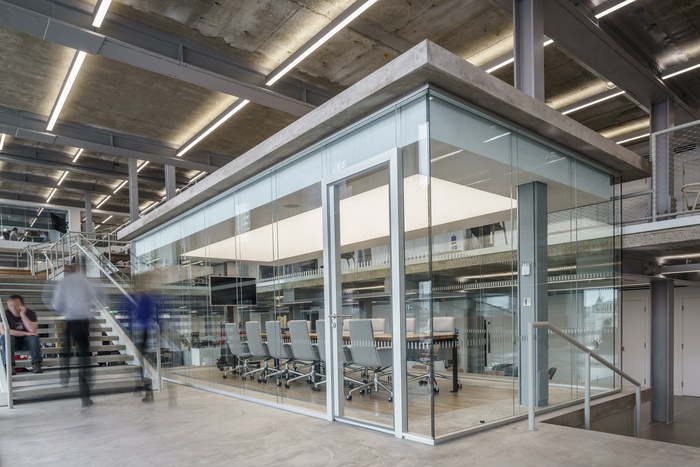 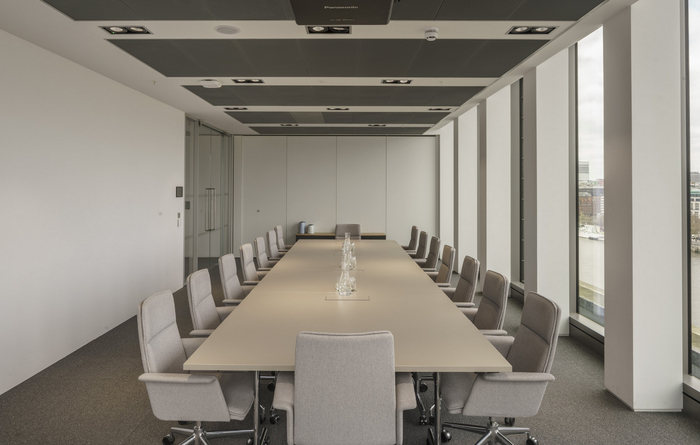 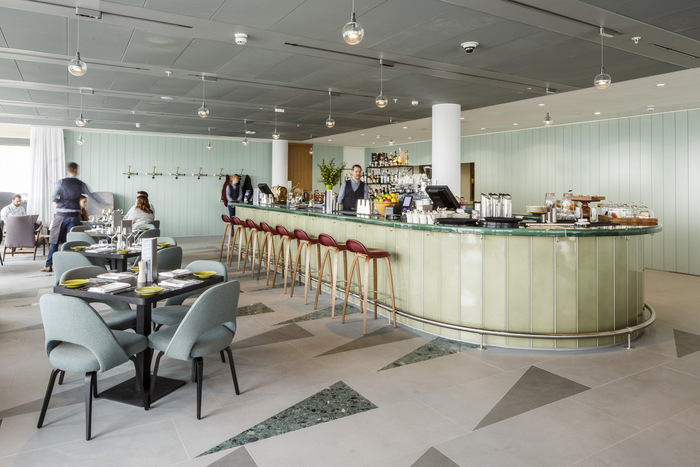 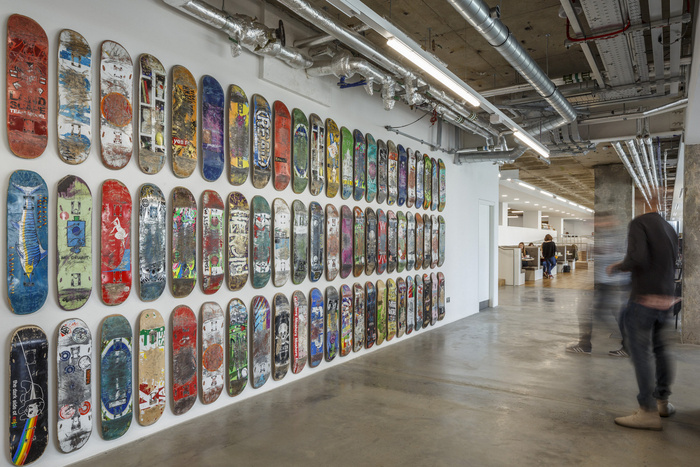 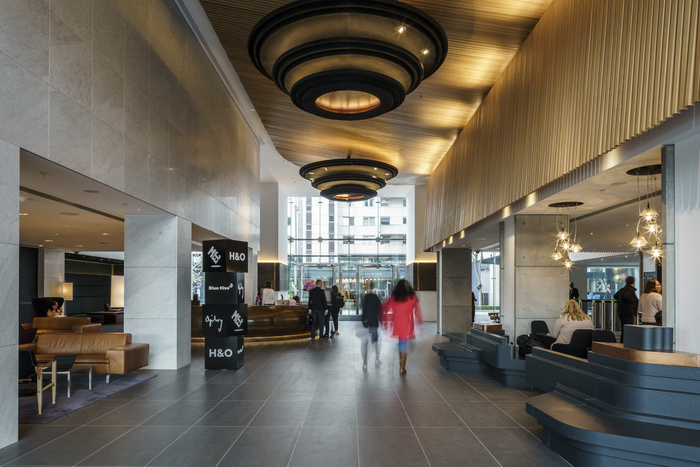 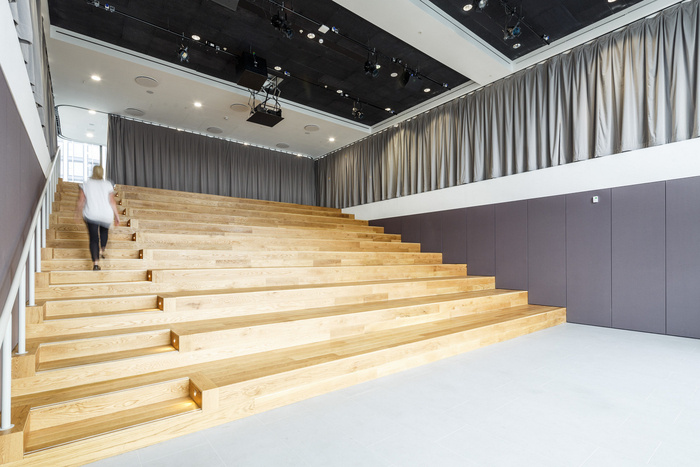 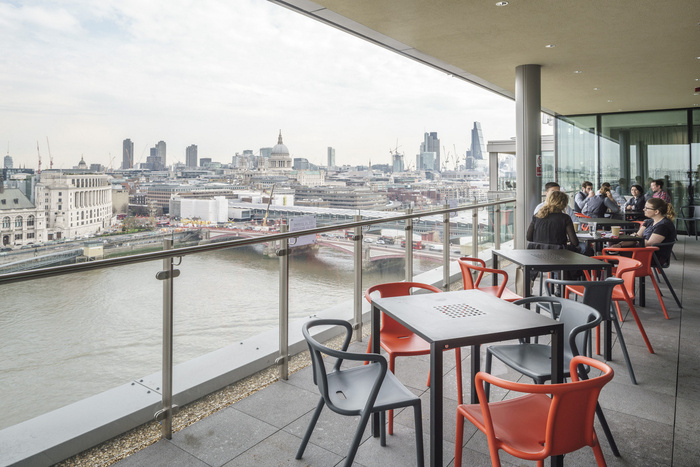