Tech Hub Offices
The building was completely renovated for the redesign and the existing room layout with its traditional structure of individual offices and hallways was broken up. The result was open-space offices and common areas combined with communication zones. The lavish lounge on the top floor serves as a break room and an event location. With its complete glazing, it offers an impressive 360-degree view of the city and of the SoHo House opposite.

The office spaces, some of which have up to 2,000 sqm of floor space, are zoned by the marketplace with glass boxes positioned as rooms within rooms for informal meetings as well as established break and lounge areas. As part of the Zalando model, colored cushions as well as carpeting, seating, and lighting serve as highlights in an otherwise modest office space.

The former media building was stylistically reconfigured into a working environment with an industrial character by clearing the building structure and creating an open view of the technical fittings Worksta- tions with workbenches specially developed for Zalando complement the impression of a raw industrial building.

Innovation Lab
The project area functions as a design think tank and serves as a workshop and experimentation room for development of new ideas and implementation of initial prototypes by Zalando staff. It can also be used for workshops, talks or presentations.

The Shuttle is conceived as an open space that can be used flexibly, thanks to mobile furnishings. The all-white walls and open ceiling installations form a neutral frame and are completely available for every type of digital projection. The anthracite-coloured screed that merges with the window facade on the “green” level forms the antithesis of the “white room”.

This tailor-made, 11-metre long seating landscape with trees and floor planting provides an opportunity for relaxation and conversation in a green environment. Conceived as a kind of landscape relief, it also acts as a filter between public and interior space and protects from the direct gaze of passers-by.

The other fixed furniture in the space is the “Toolbox”, modelled after the wire mesh containers used in production logistics. This white mesh box with neon green floor coating, made especially for the Shuttle, serves as storage for technical devices.

A freestanding rear wall in the space conceals a storage room for the mobile stage and furnishings and a fully equipped prototype workshop with workspace for two people. It can also be used as a projection wall and be hidden by floor-length curtains, if necessary.

Food Court
The food court directly connected to the Shuttle is available to company staff as a cafeteria and lounge. Opaque curtains can spatially separate the dining area. The spatial concept of the food court is comple- mented by the coffee bar on the street side, a games zone with video corner and billiard table, a lounge style sofa area and informal meeting zones. Small windows provide occasional views into the adjoining innovation lab. 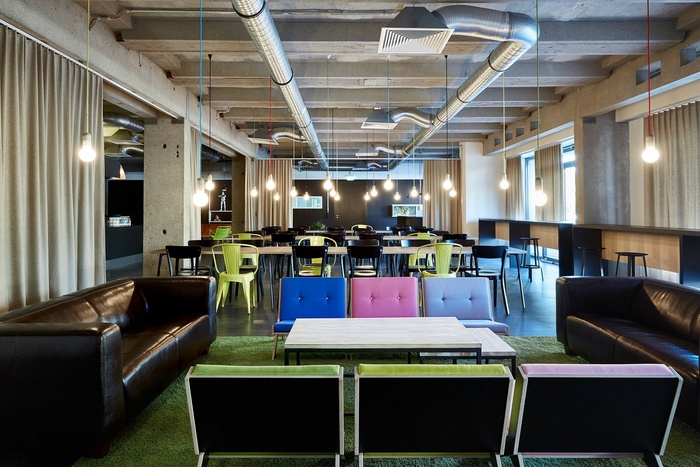 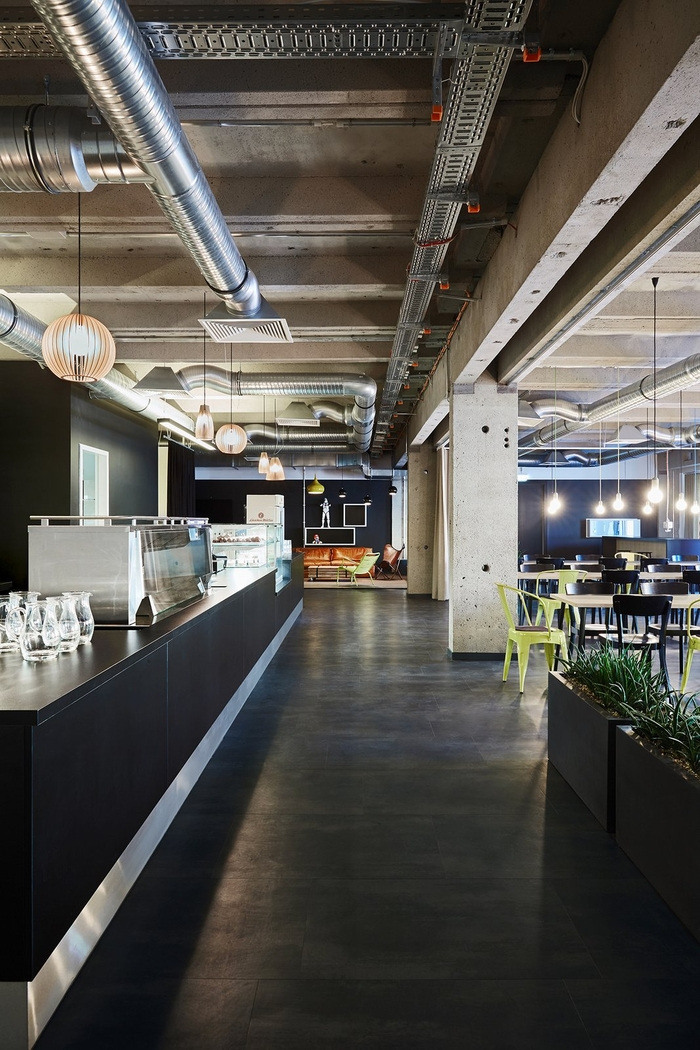 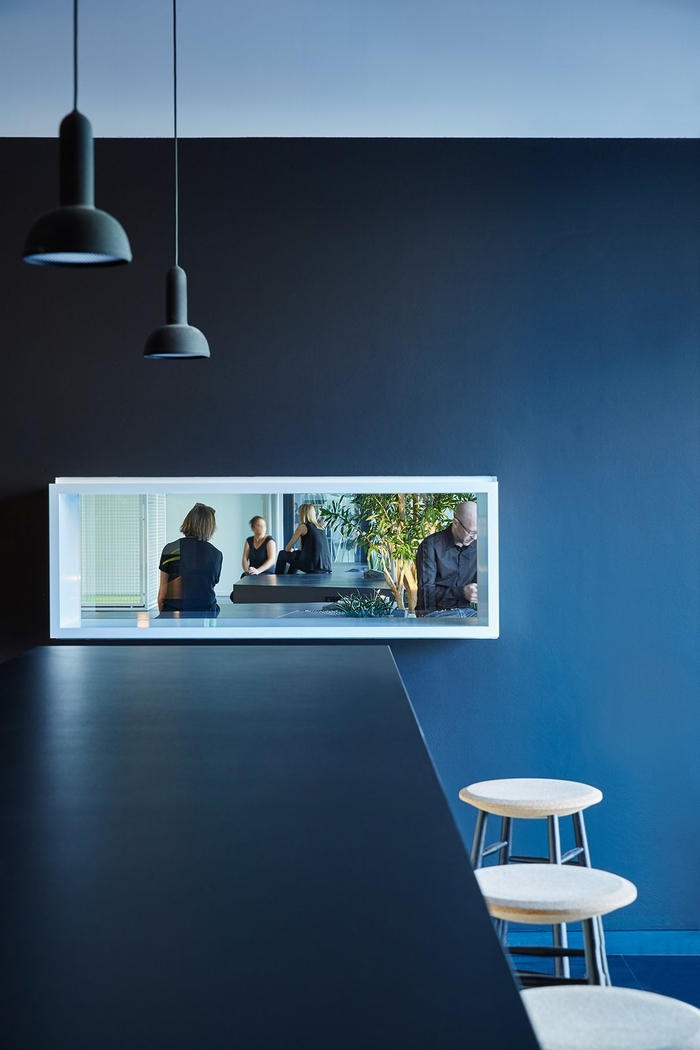 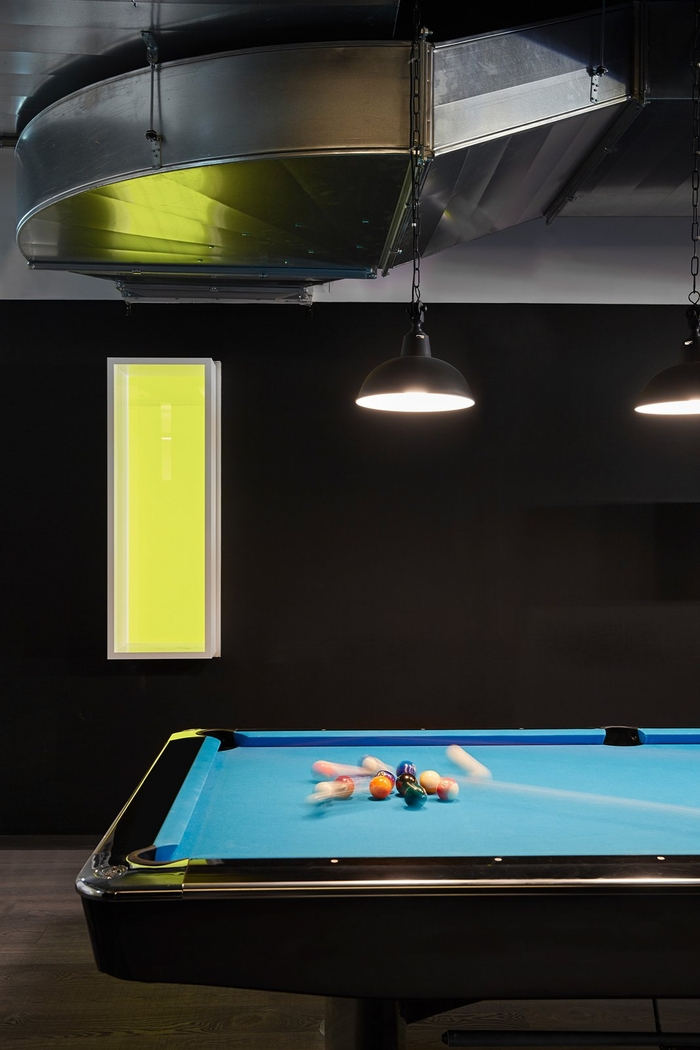 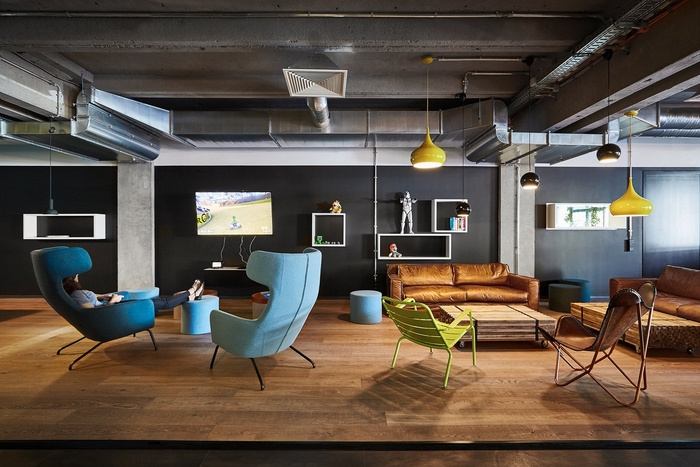 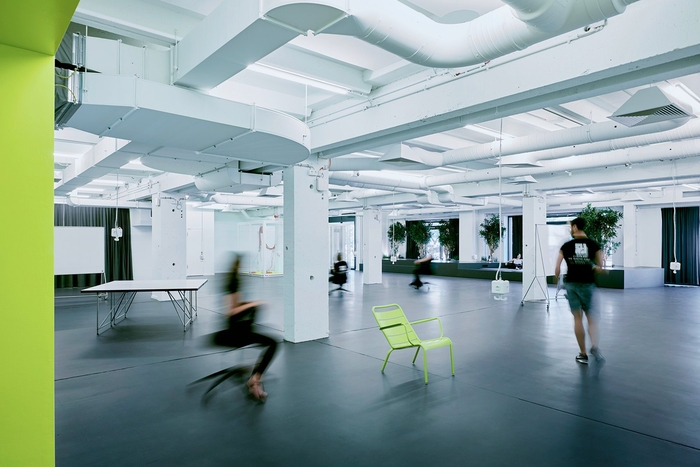 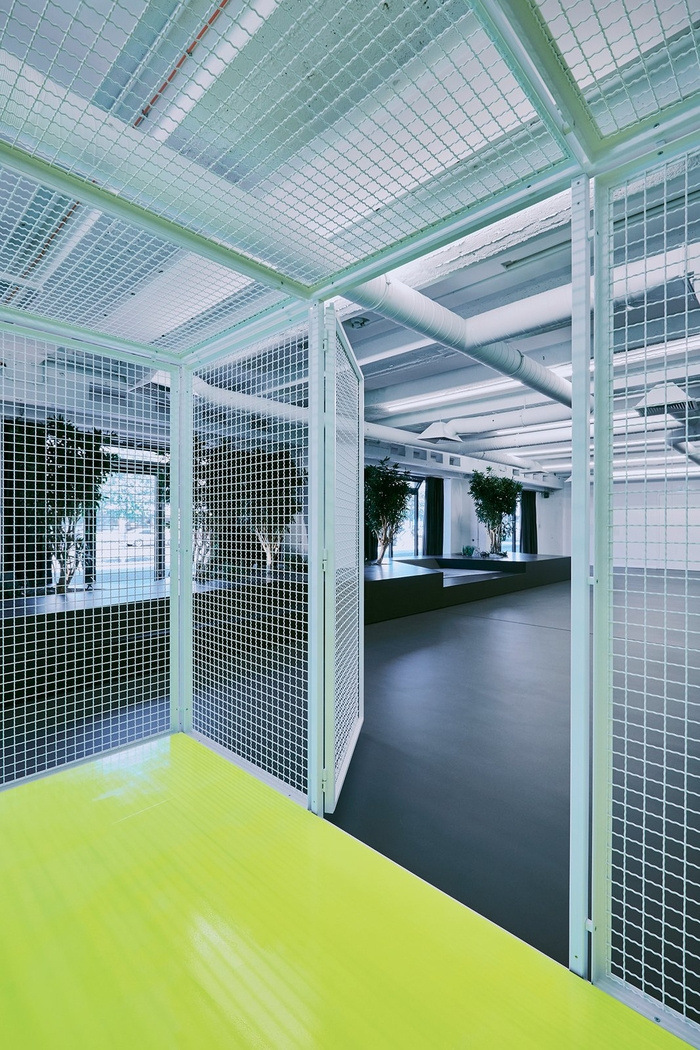 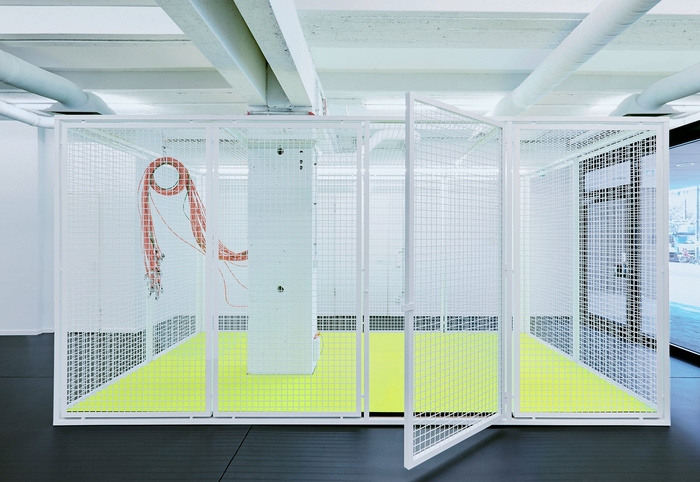 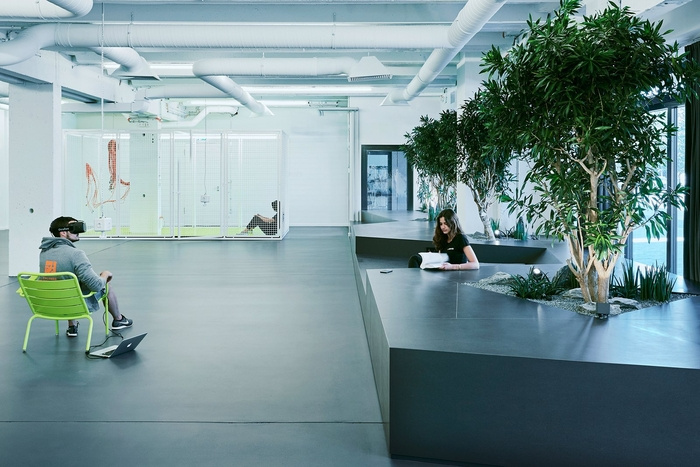 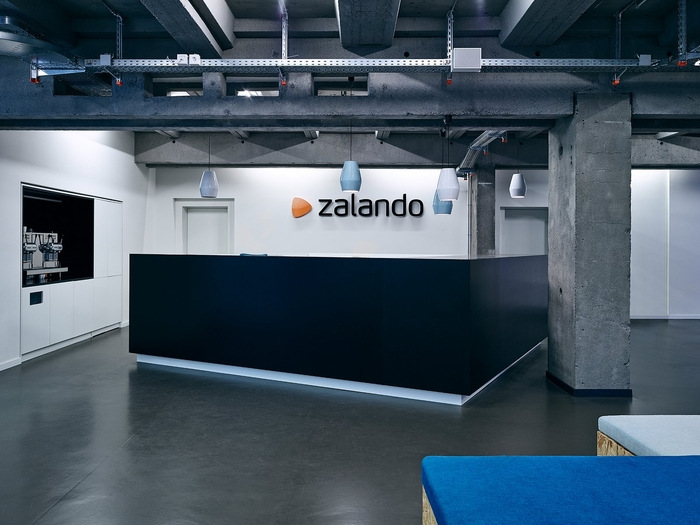 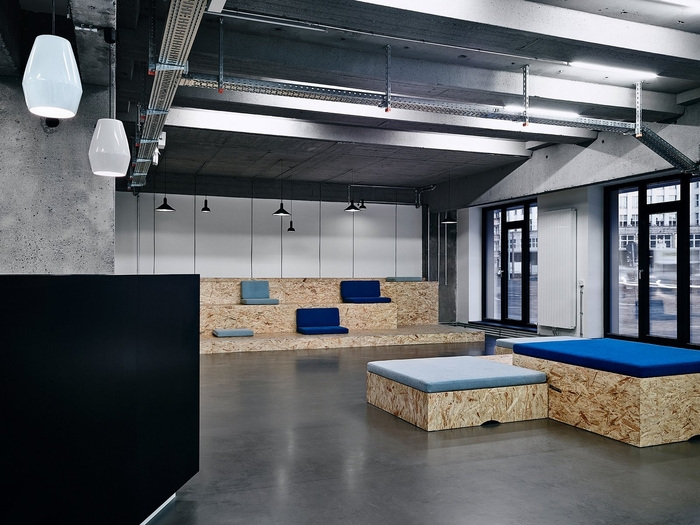 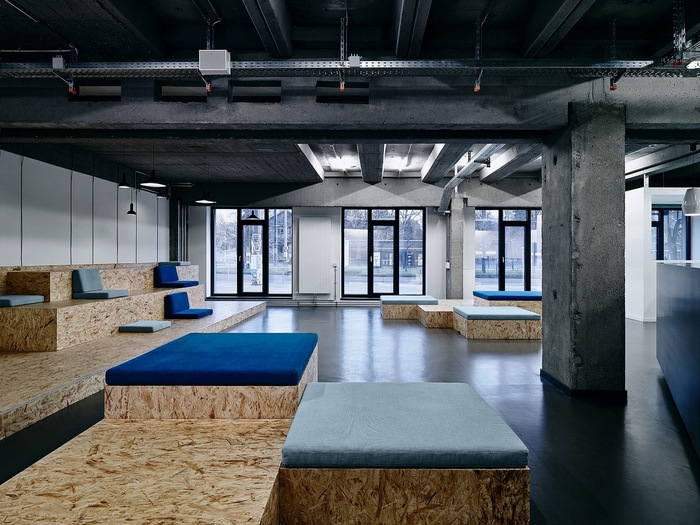 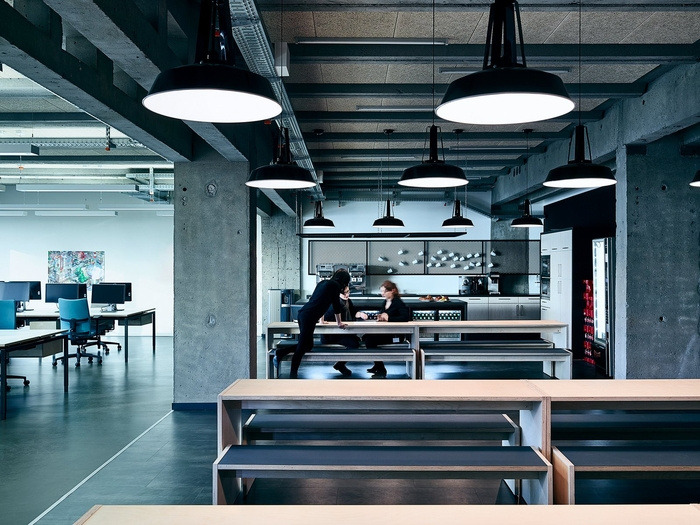 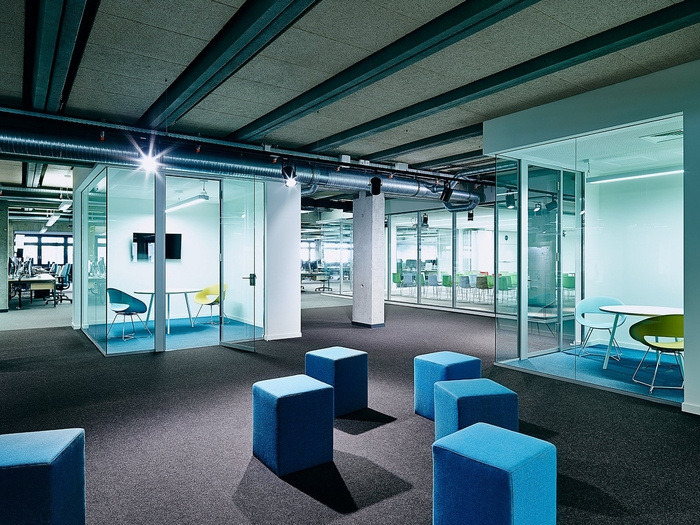 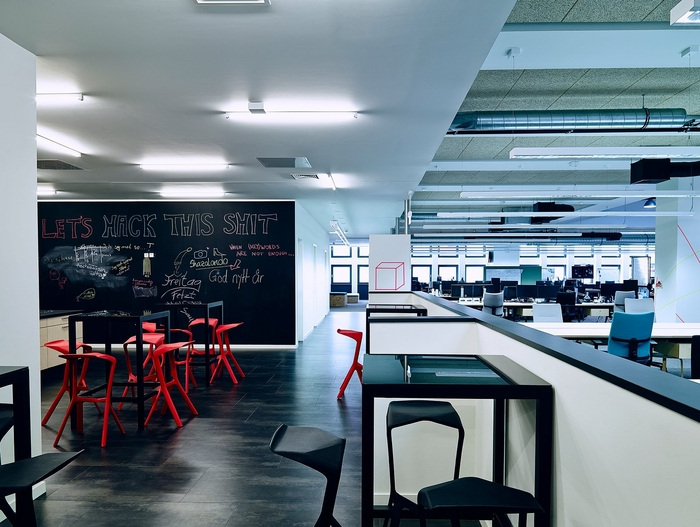 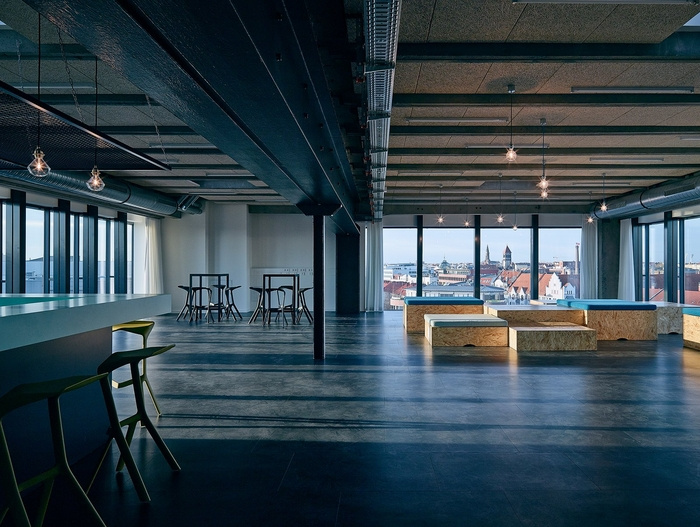 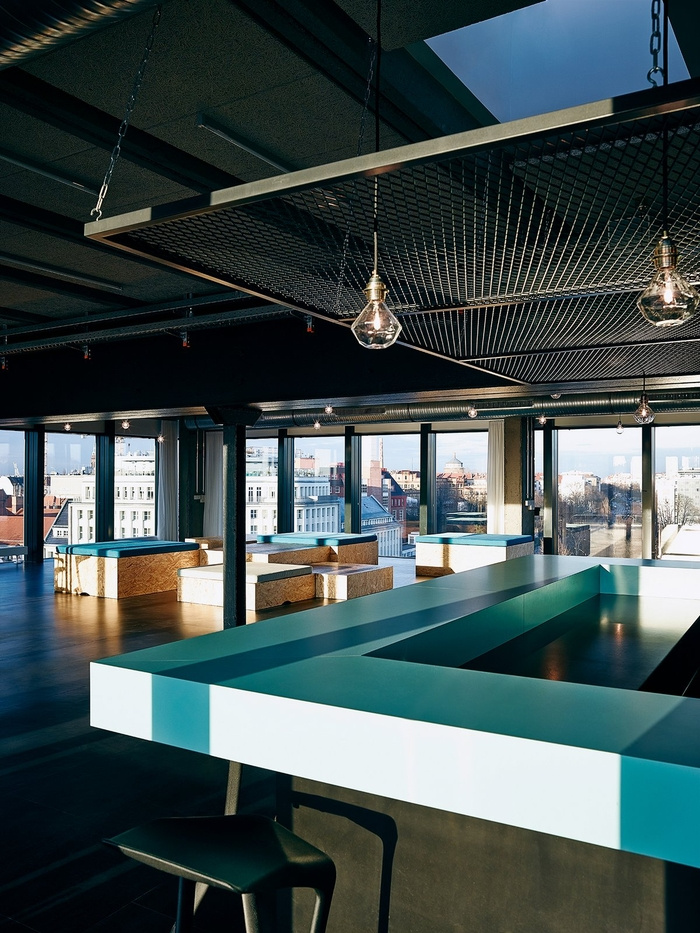