de Winder has developed the new headquarters design for online fashion company Zalando which is located in Berlin, Germany. The headquarters offices are part of a larger project including a food court, tech hub, and fashion hub spaces.

Zalando, the exchange-listed Berlin company, moved into new headquarters in the immediate vicinity of the River Spree in Berlin‘s Friedrichshain district in mid-2014. De Winder designed the new offices in the two new, 7-story structures at the Hotel + Office Campus Berlin, following interior design of Zalando‘s Fashion Hub and TECH Hub locations in 2013.

Continuing the design model developed especially for Zalando, a working environment with industrial charm was created in the new building, which has received both DGNB Silver and LEED Gold awards. Open spaces to promote communication, retreats for concentrated work, conference rooms for teams and special zones for informal exchanges are distributed throughout the floors. Thanks to a rethinking of the areas contrary to the cellular structure of a classic office environment, a new, flexible 3.0 working environment was created for this young online company.

The simple atmosphere of the spatial envelope was deliberately broken up by means of special areas accentuated by colors. Thus the meeting rooms arranged centrally around the lift core, the coffee areas, copier stations and the lounge and conference areas on the top floor glow with the subtle gradations of the 7 color schemes that were assigned to each floor. Glass boxes highlighted in color, which serve as retreats for temporary individual work, open service kitchens and separate break rooms, which are also suitable for short meetings, complement the open-plan spaces on each floor. The location-related color code system results in greater employee identification with their work place and enables faster orientation within the building.

Like Zalando‘s TECH Hub and Fashion Hub locations, workbenches on mill finish steel frames also serve as workplaces in the headquarters and, as a component of the specially developed corporate architecture program, continue the concept for the company‘s locations. Acoustically effective ceiling sails that are also conceived as cooling ceilings minimize background noise in the space, while also integrating the lighting layout above the workplaces.

On every floor, the lift lobby is conceived as a black box. An installation of golden metal cylinders like a floating cloud enlivens the ceiling, concealing the lighting at the same time. The eye catcher in the cent- ral entrance is the ceiling over the reception desk, which takes up a variant of the lobby design motif with round acoustic sails and black light fixtures. The conference rooms on the top floor were given a ceiling design consisting of a combination of acoustic sails and round pendant lights that continues this theme. The three multi-media conference rooms can be opened up as required, transforming them into a 160 m2 event venue. The color accentuated employee lounge and bar area complement this floor, with its expansive view of the Spree waterfront, the Oberbaum Bridge and the neighboring 02-World event hall. 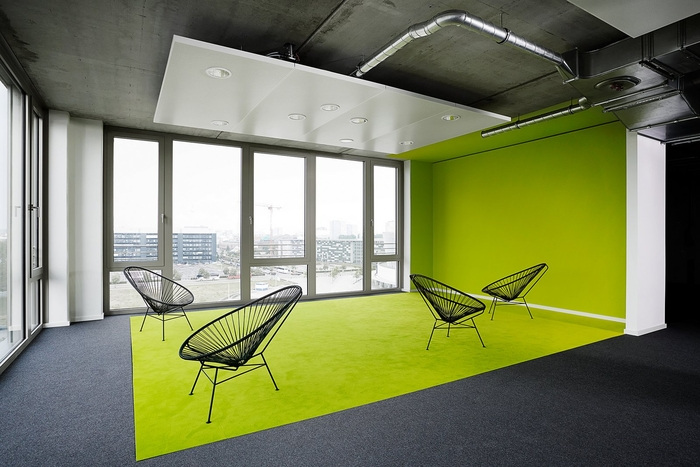 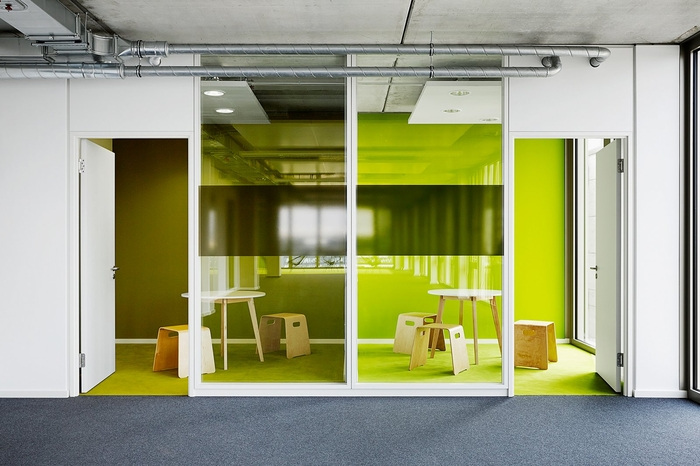 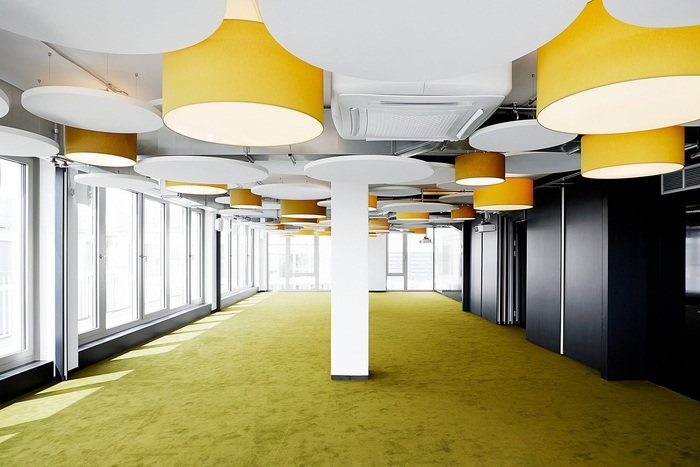 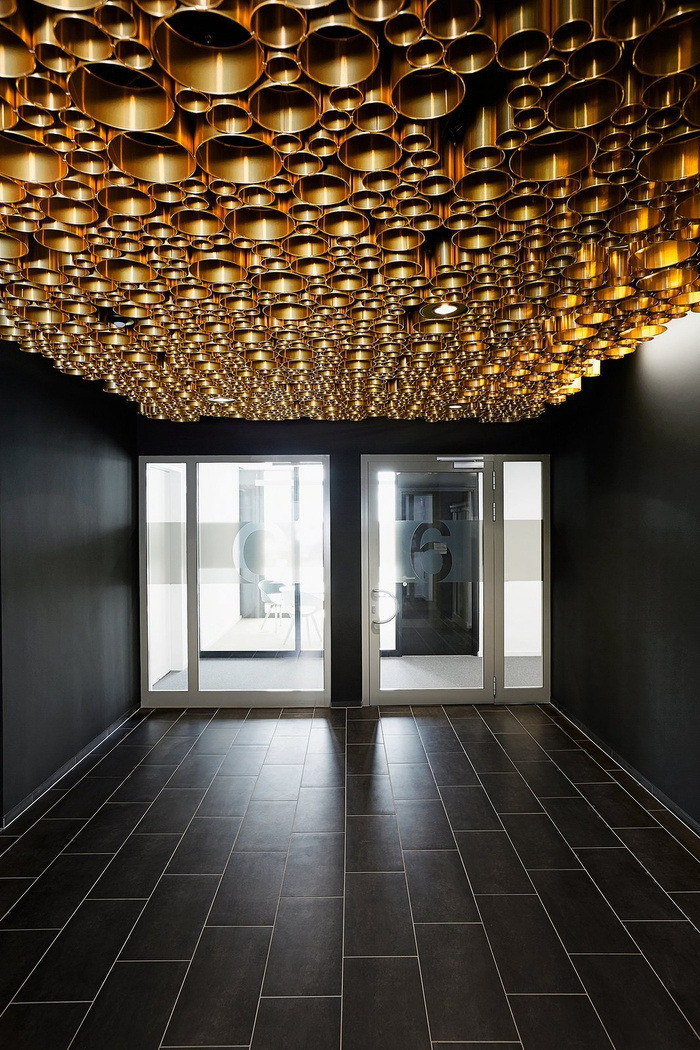 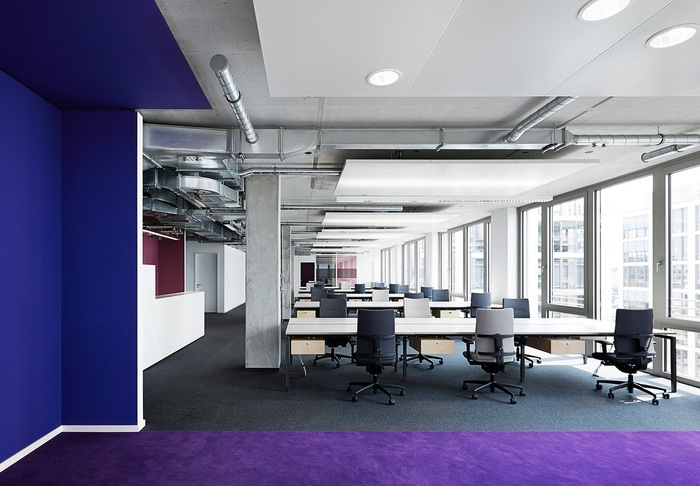 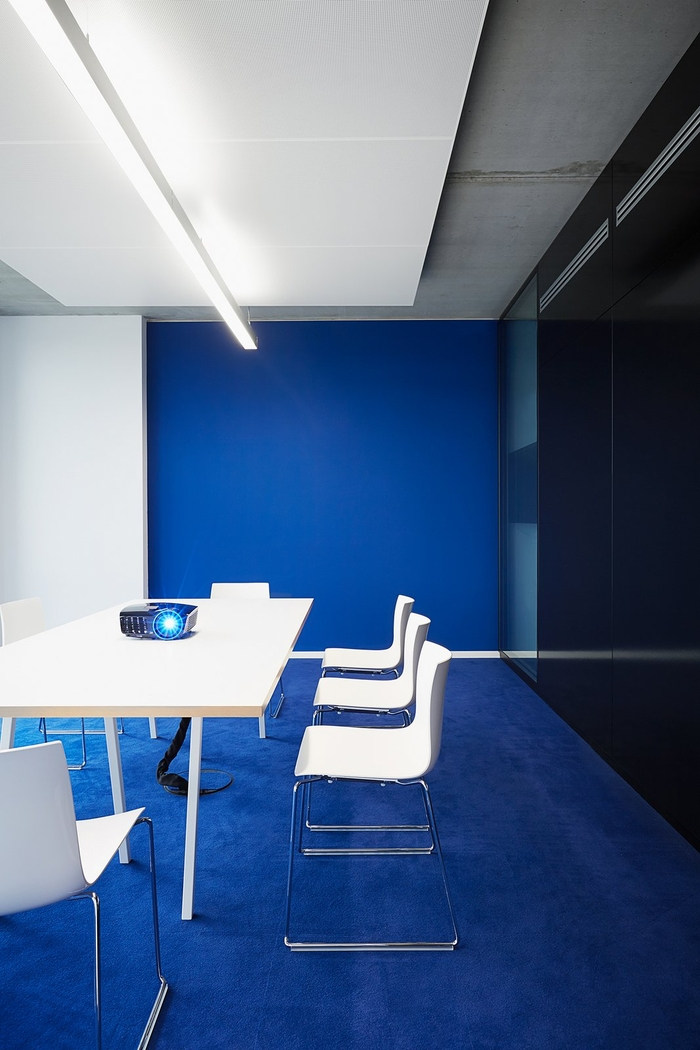 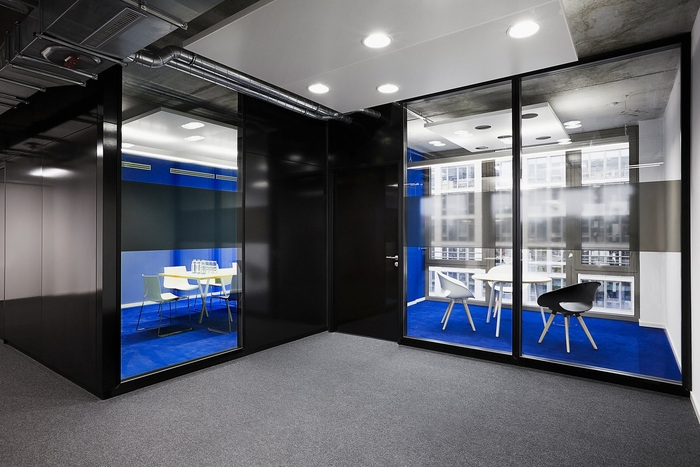