The site investigation has thus given birth to an emblematic protean space in which raw and dynamic shapes enhance the cutting edge digital technology research and creativity, the client’s DNA. Upon entrance, one discovers the first source of inspiration: that of the primary energy, this hypnotic rave-like movement, through a vibrant yellow and black staging.

The design addresses both the designers, technicians and programmers requirements, transmuting the workspace into a unique platform of sound and light performance.

Special attention was paid to conserving traces of the labouring past of former textile factory of the Chabanel district, in the north-central area of Montreal — one would almost think that this ‘spatial recycling’ is reminiscent of anti-design — such as poorly hewn wood and peeling white paint. Thanks to the culture of the ephemeral-oriented design, the high-ceiling place has finally revived. The recent wall partitions made of pine boards keep the original dynamics. The same goes for those former openings that, once preserved, are devising a more desirable path to the chaotic nature of a creative workshop than that of a conventional working place…

Free movement is another key aspect. Knowing that vibrations affect the structure of things and the mind, the idea of sound propagation and of connectivity is emerging from a succession of open space rooms where 45 workstations and a café are placed. Priority given to the collective, closed offices have been limited to 10: administration, management, four meeting rooms, two of which are located in a towering second polyhedral monolith, a large conference room and adjoining the warehouse a third and last monolith that serves as a black box for the digital lighting programs experimentation.

In addition to space optimization, the two mezzanines help keep visual contact. Moreover, collaborating with Jean de Lessard’s team, the architects of the firm MU Architecture have ensured that each of the interventions and structures in this project with many constraints complies with Canada’s Building National Code. Like the sculptural staircases and the corridors, even the narrowest, the mezzanines reinforce the idea of networking between each floor and each area of activities.

This is also for light and sound-waves reverberation purposes. Sound waves travel through the air, are hitting obstacles, bypassing them and getting deflected elsewhere. The angularities of both the black monoliths and the yellow painted elements illustrate this vibratory principle. The entire space becomes music. As for the light which is at the core of PixMob’s activities, two skylights were reintegrated into the actual design as well as windows facing south to provide an adequate natural light. It allowed the designers to focus on setting an intimate artificial lighting, more conducive to creativity and celebration. 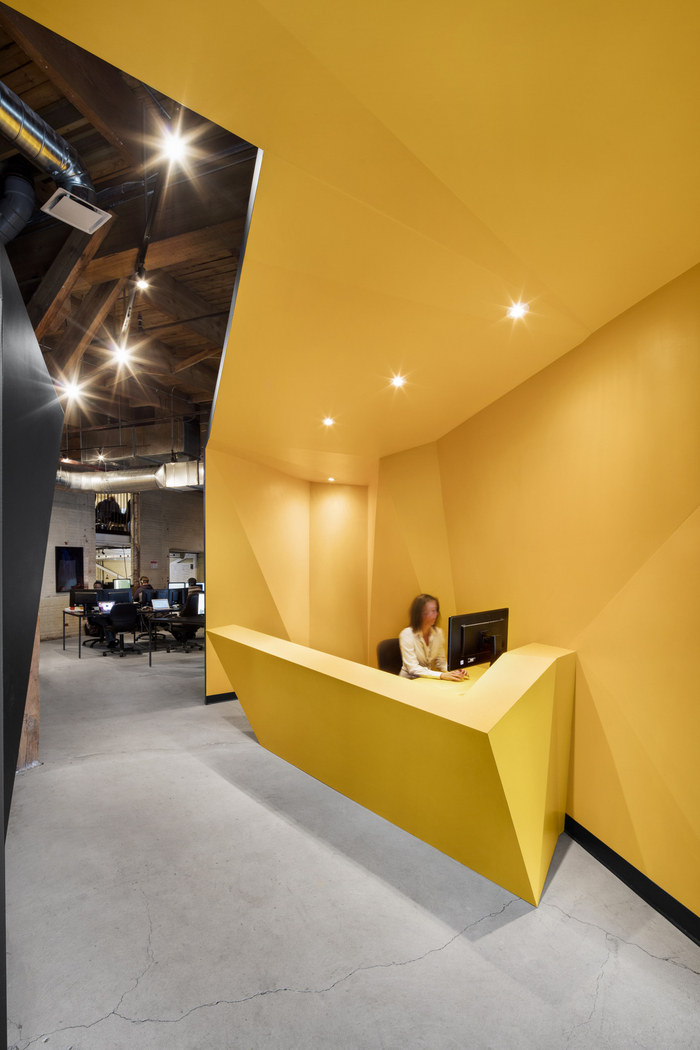 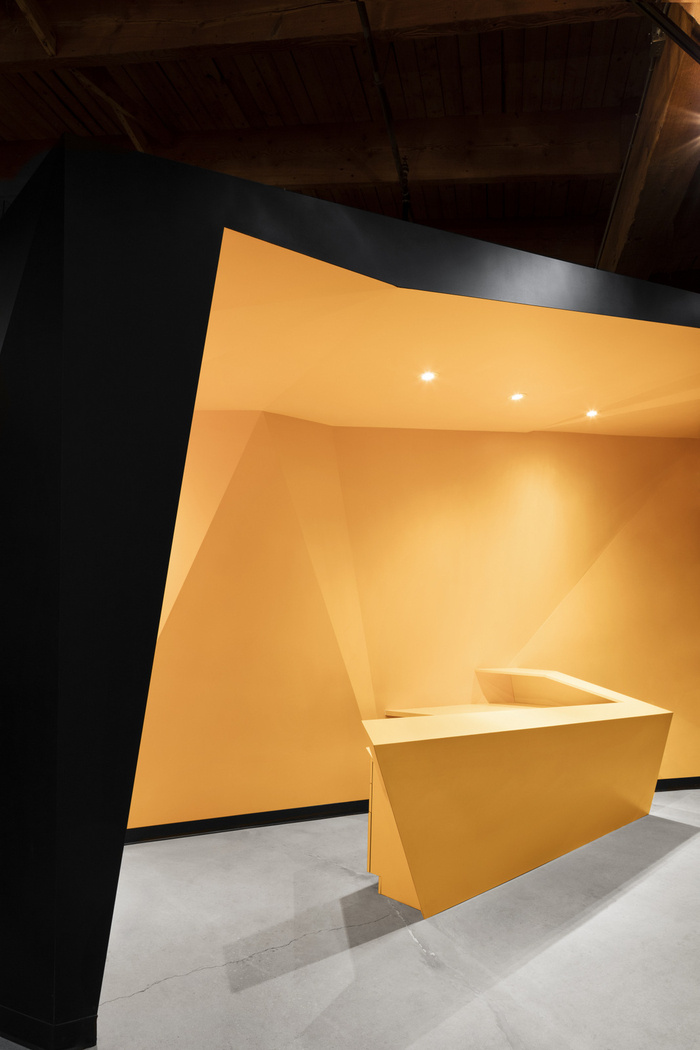 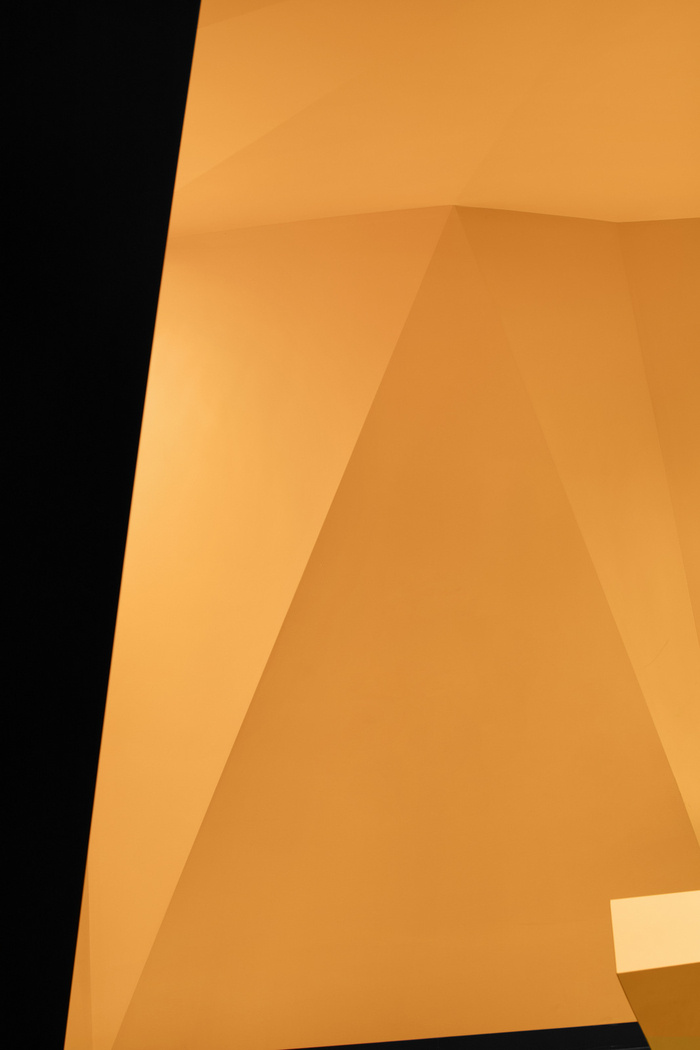 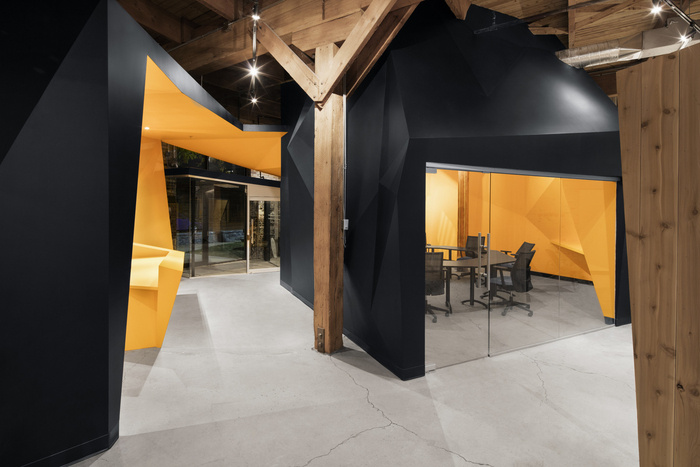 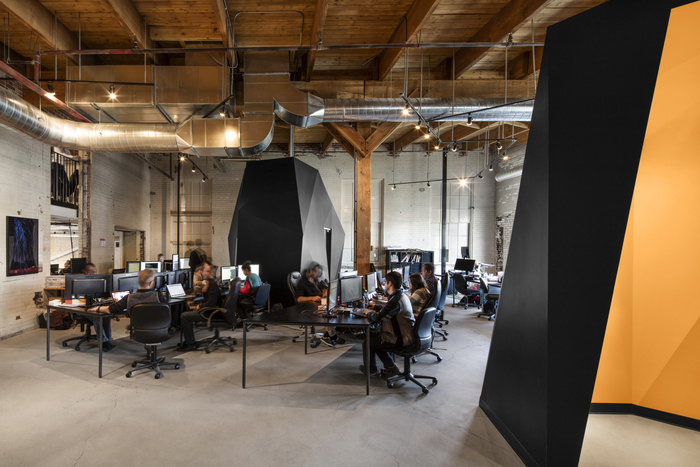 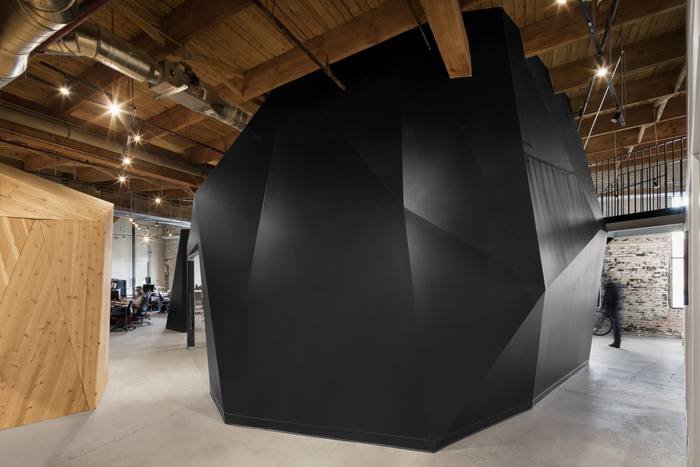 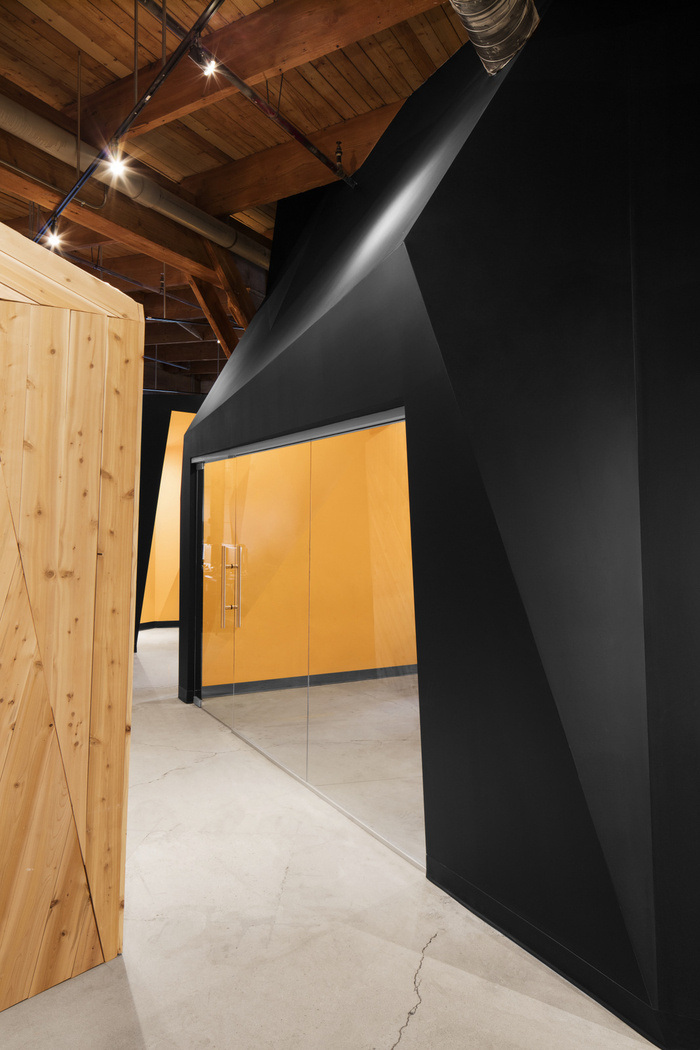 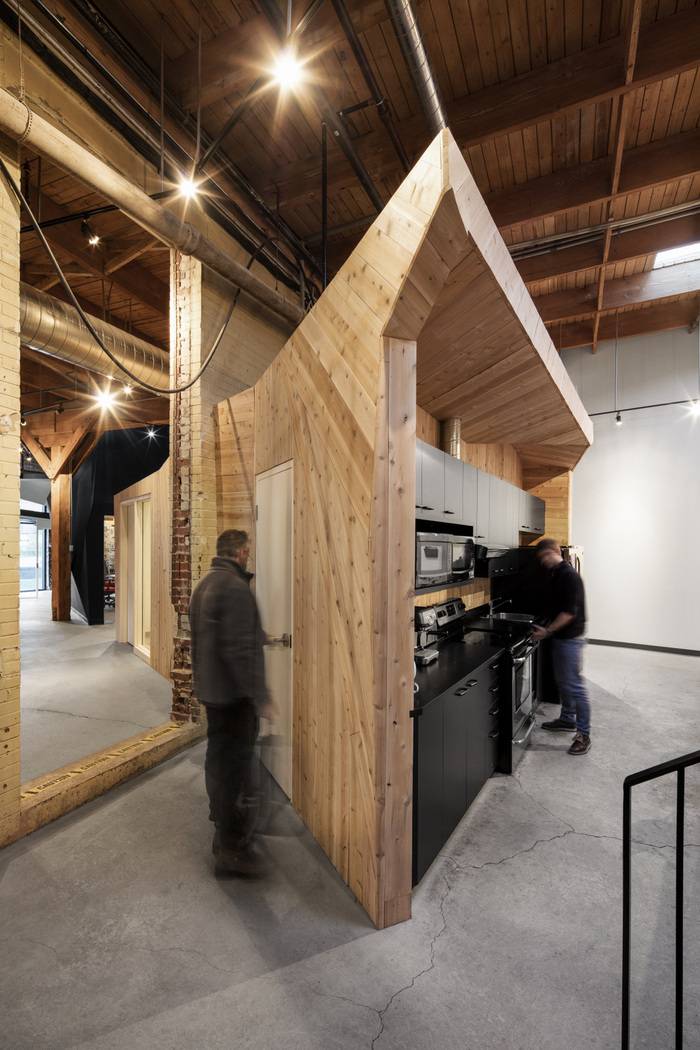 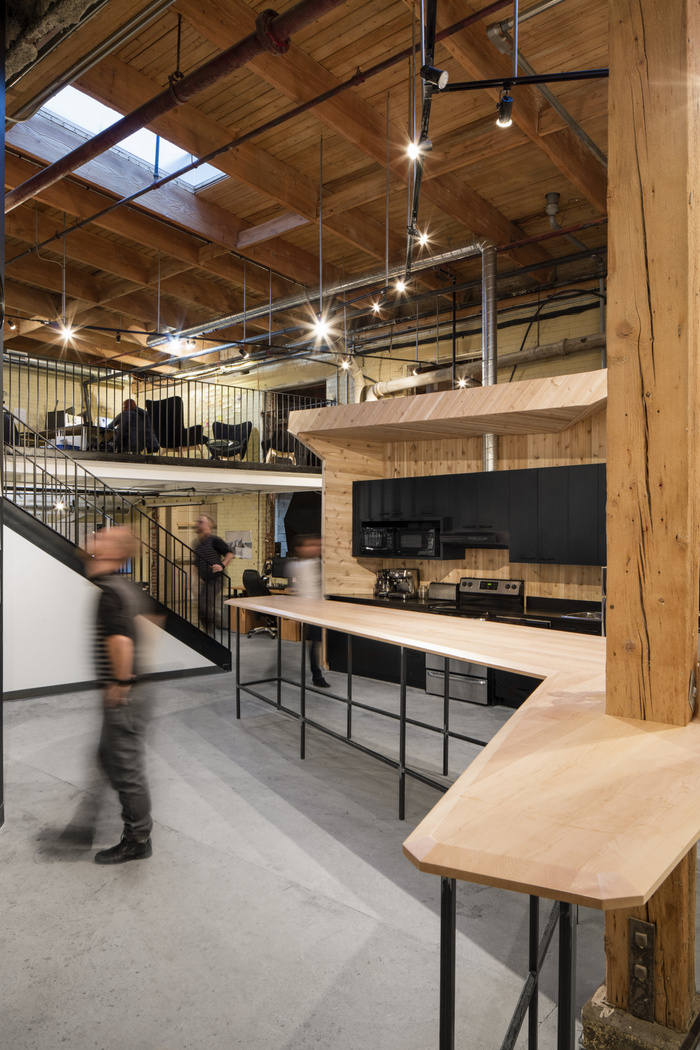 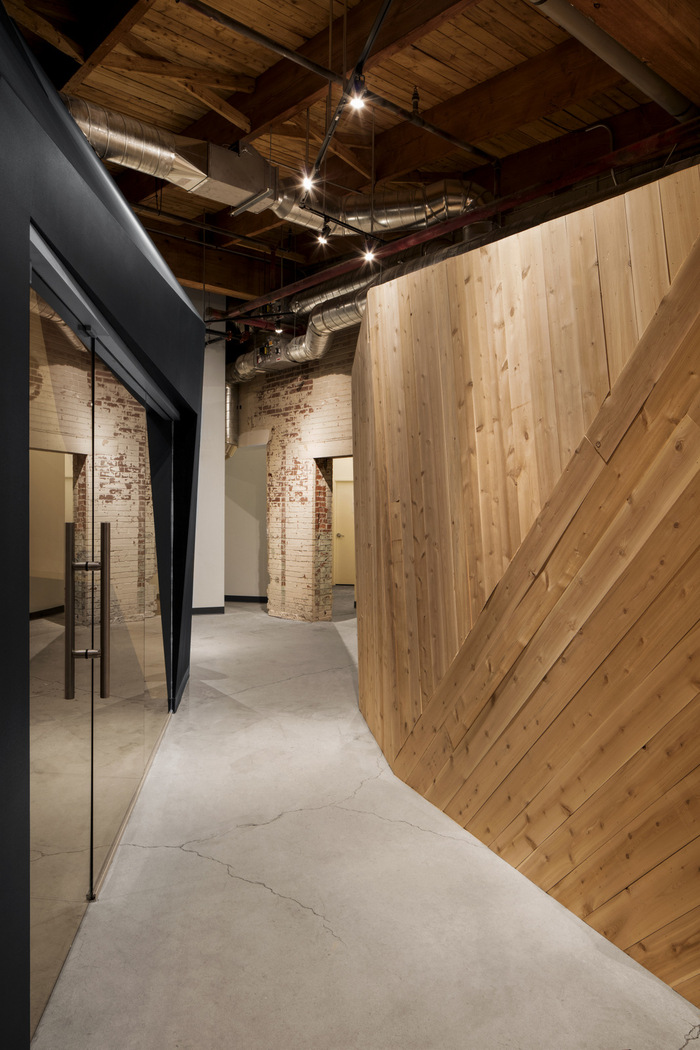 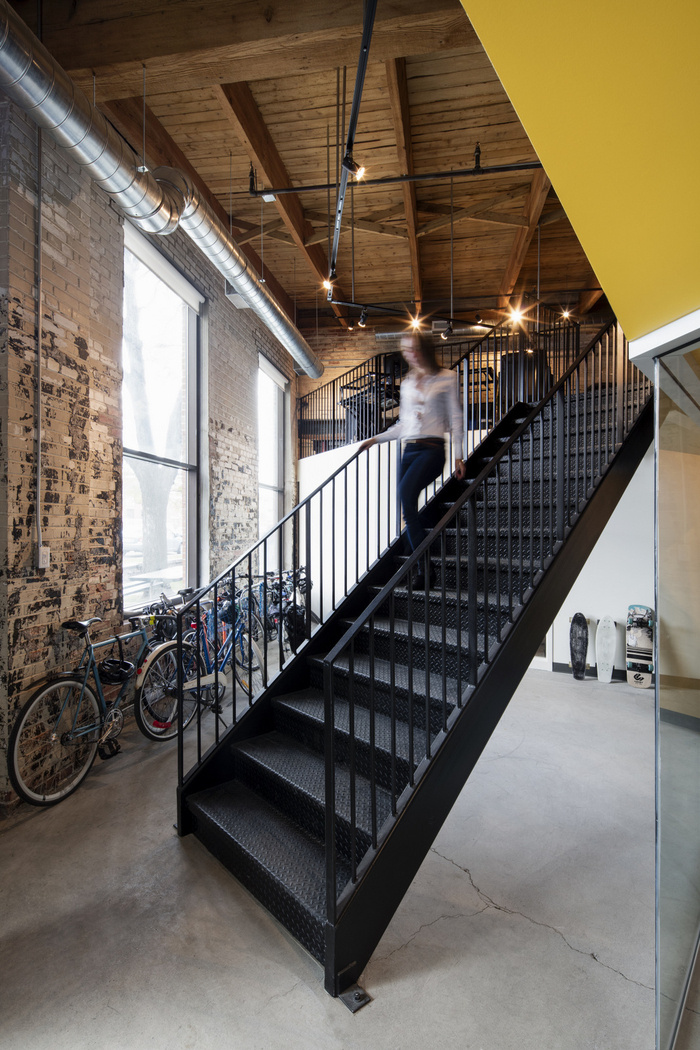 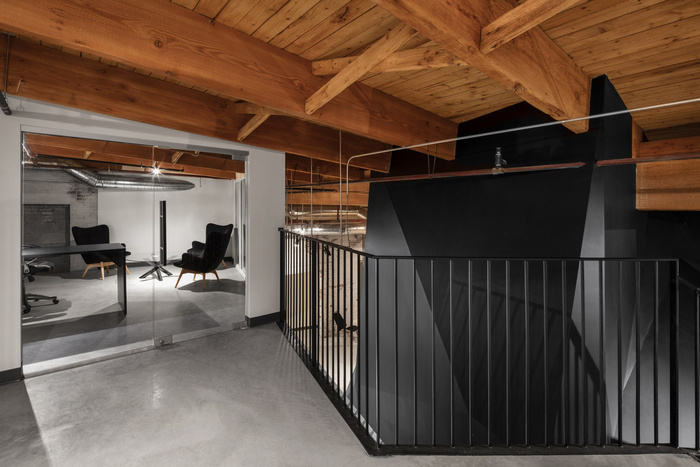