LEO digital network is a role model in the creative industry of China who has been consistently searching for new ideas and vitalized by young blood of the NEW Chinese generation, the restructuring of the company also brought an opportunity to creating a refreshing new image and taking the company culture to a com- plete new level.

LLLab, a newly founded design studio, initiated in Germany, currently based in Shanghai and Porto, was requested to design the new LEO office in Shanghai, provoking and redefining the stereotypically imagined work space in China.

Transparency
All meeting spaces and offices have been separated by using clear glass to allow natural light to be brought into the deep work space as a critical part of the design concept, to share, the space, the light and the purity of creativity.

Meanwhile, it is to challenge the controversial term “transparency” in a stereotypically understood Chinese working hiararchy. The transparent, only separation between spaces become functional inter- faces where meeting notes, brainstorming ideas to be written on, essentially omitting all boundaries and integrates all spaces.

Materiality
The tone of the entire space is designed to be raw to depict the creation process of ideas. Reflective concrete finishing has been applied to the entire open work space to reflect outdoor light to the inside.

Ceiling is treated using concrete paint resembling the floor finishing, thus the lighter concrete finishing on the walls and columns dramatically brightens up the space and merges into the transparent clear glasses extending the space to the outside.

Offices, meeting spaces and shared meeting points are highlighted using solid wood as “the ‘accent’ painted on the raw canvas”, giving a buffering and slower rhythm into the movement and providing transitional zones into the spaces.

Creative atmosphere (open and communicative space)
Shared and communicative areas between teams in the office are simply created by different arrangement of furniture, therefore, reconfigures the pattern of movement.

Coffee areas, shelves with books, drinks, plants in a variety of scales are carefully placed, illuminated by raw, industrial street-lamp like lighting, making the space as multi-functional as library, cafe and bar, a place where the new generation appreciates the most, where idea exchange is facilitated and encouraged in an unnoticeable manner, proactively challenging the conventional way of working.

At night, the lights resemble the stars in the sky, breaking the boundary of the space, continuing limitlessly into the realm of imagination.

Making and Design process
To confront the impetuousness and ostentatiousness of the current social phenomenon in China, LLLab intentionally challenges the design process.

Numerous of samples and assembly iterations have been conducted on site. Office walls are constructed by designers, construction workers and the end users together to realize and optimize the functional and aesthetic desires based on individual demands, eg. office walls as book shelves, drink collection display, green wall etc.

Meeting rooms, where all patterns were conceptually sketched and handcrafted on site, while having their own characteristics, the foldable glass doors in between could be opened up generating one or multiple event spaces. Meeting room tables are made as part of the timber floor, then lifted up as the tables, which visually makes the meeting spaces more spacious and purer.

The whole design and construction process took only less than three months before the employees move in. The construction site served as an experimental workshop, designers from LLLAB and the constructors work closely together conducting tests on materials, finishings, lighting etc., realizing an intimate and honest ‘human-scale’ experience. 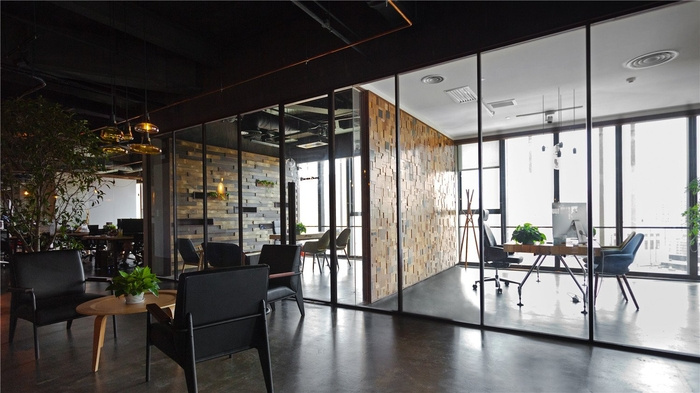 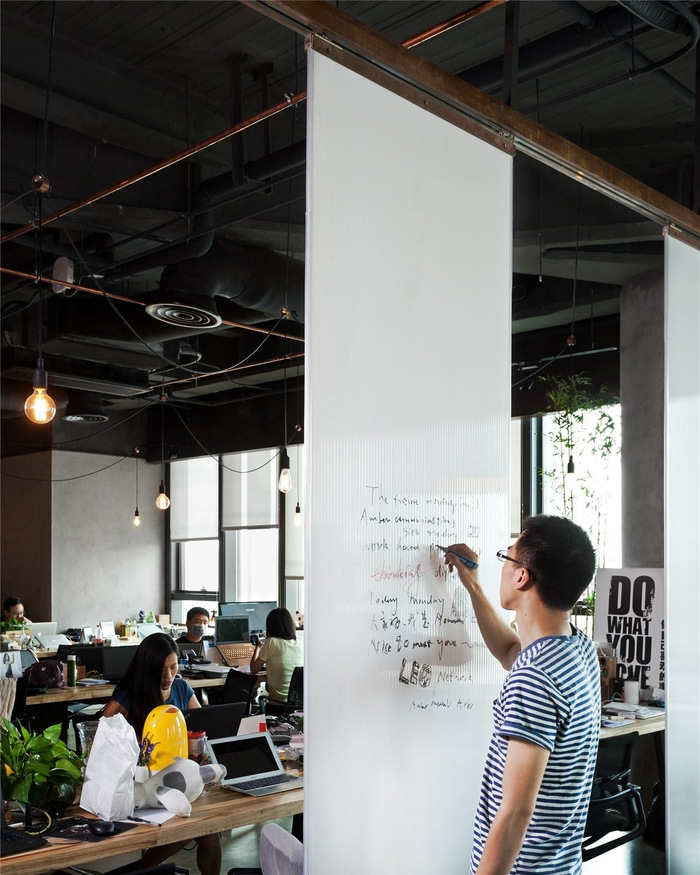 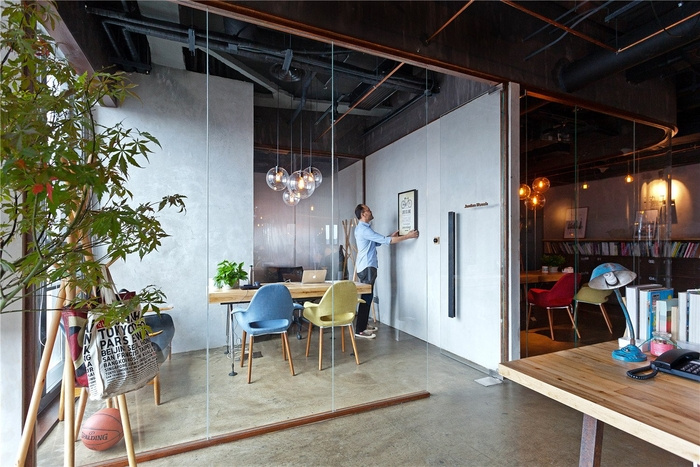 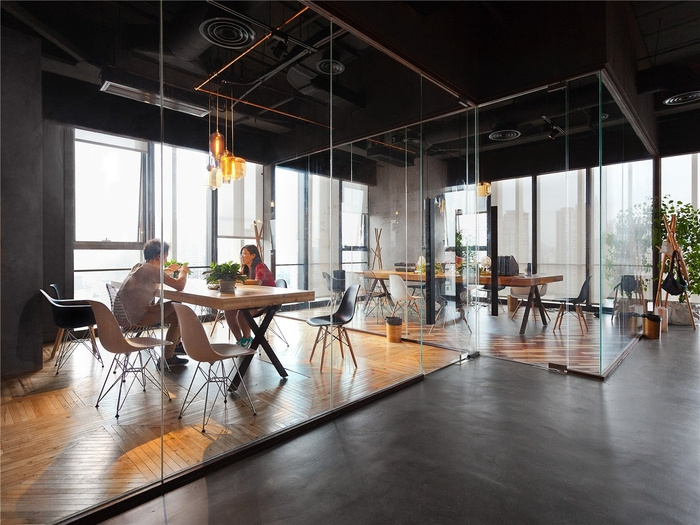 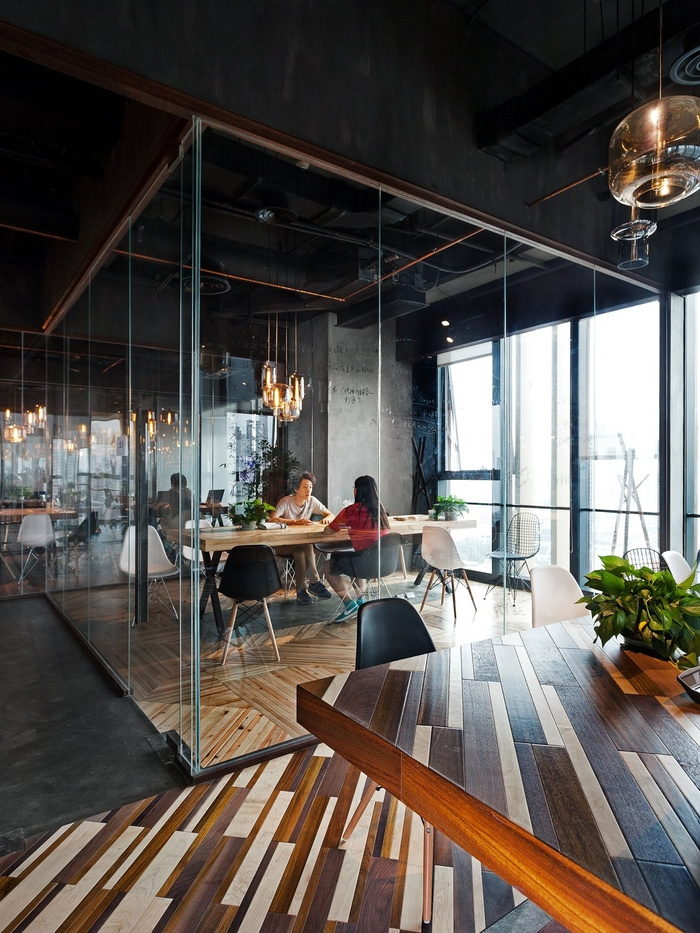 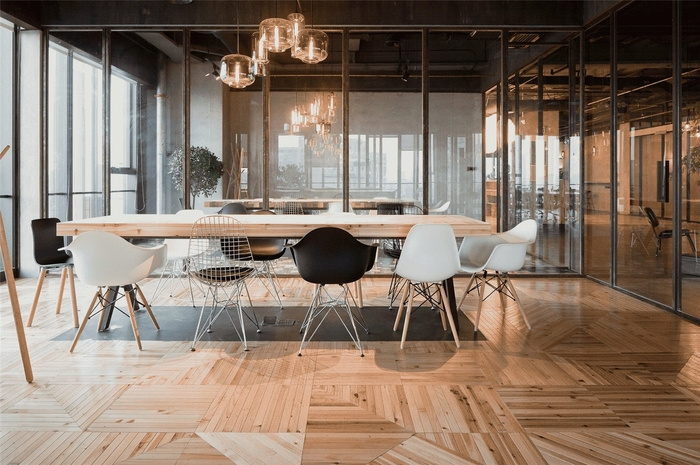 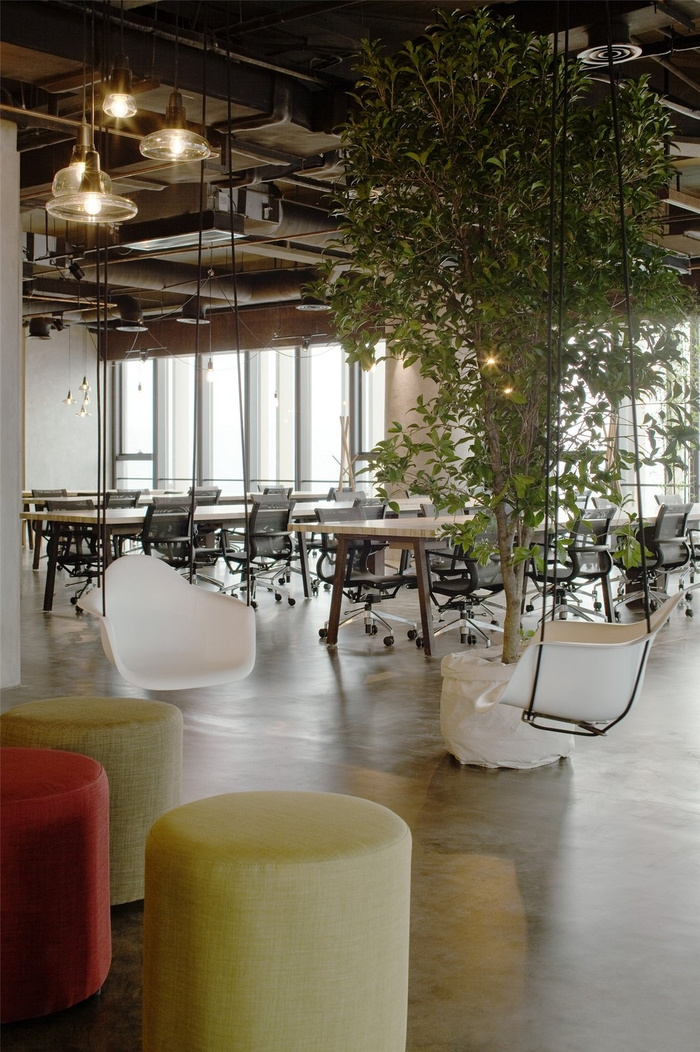 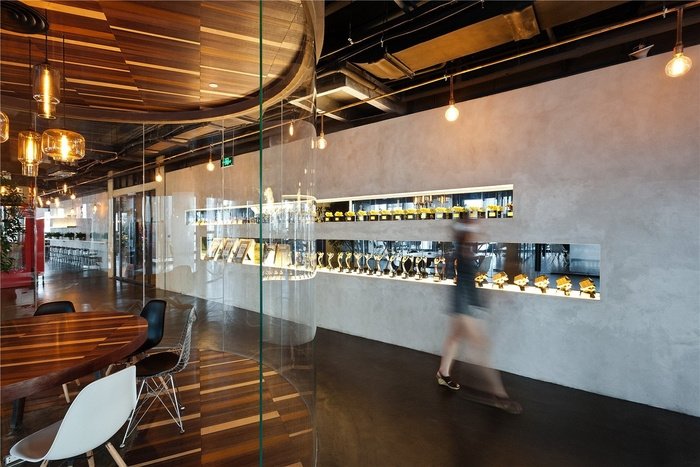 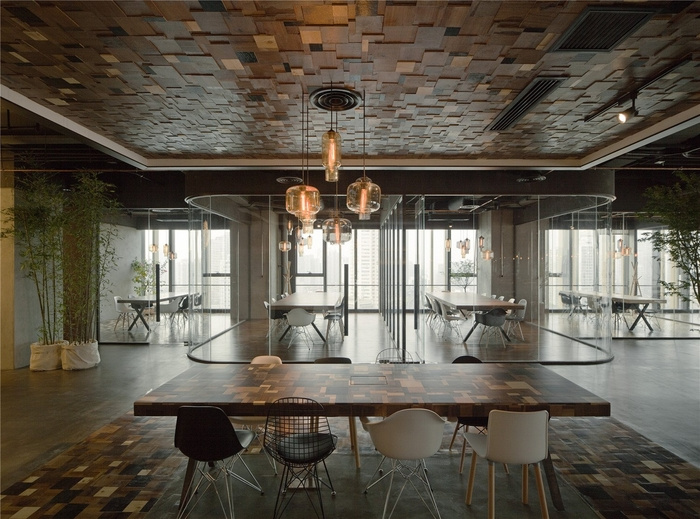 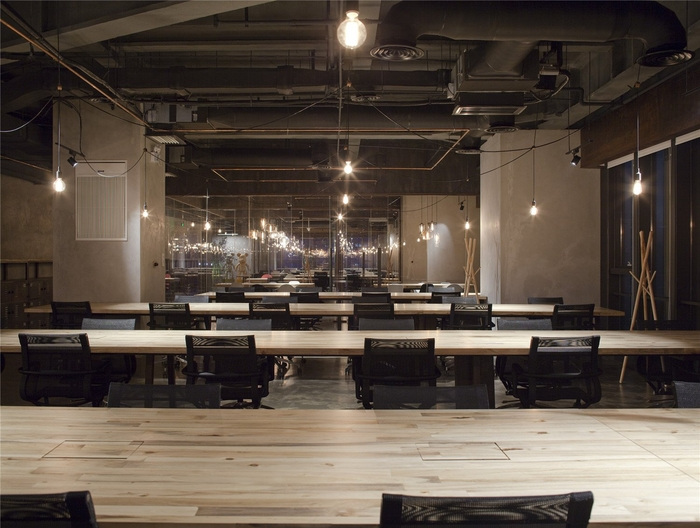 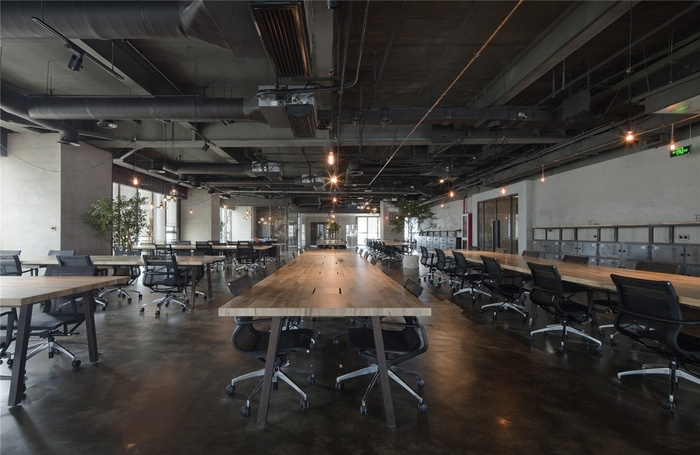 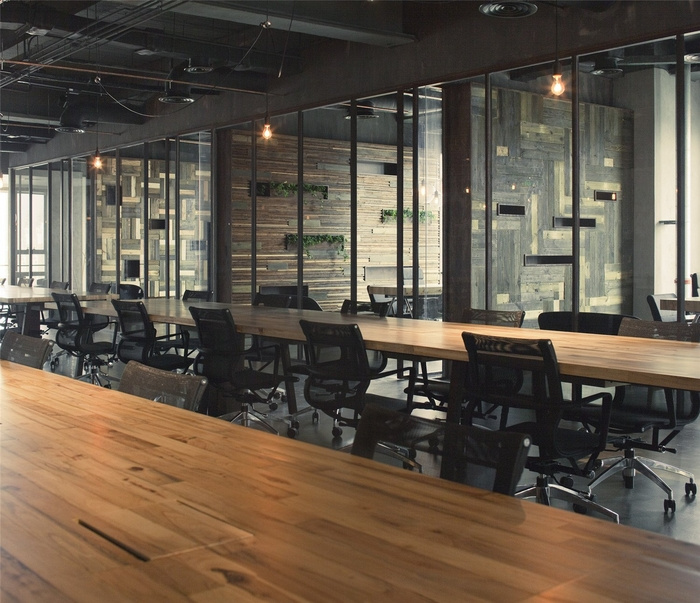 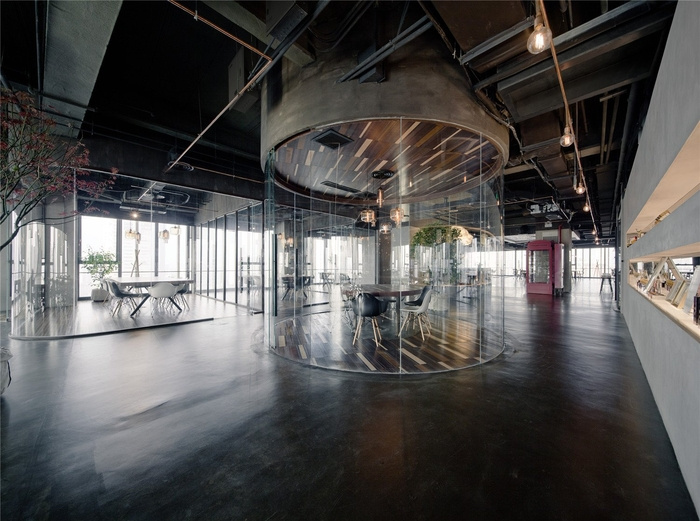 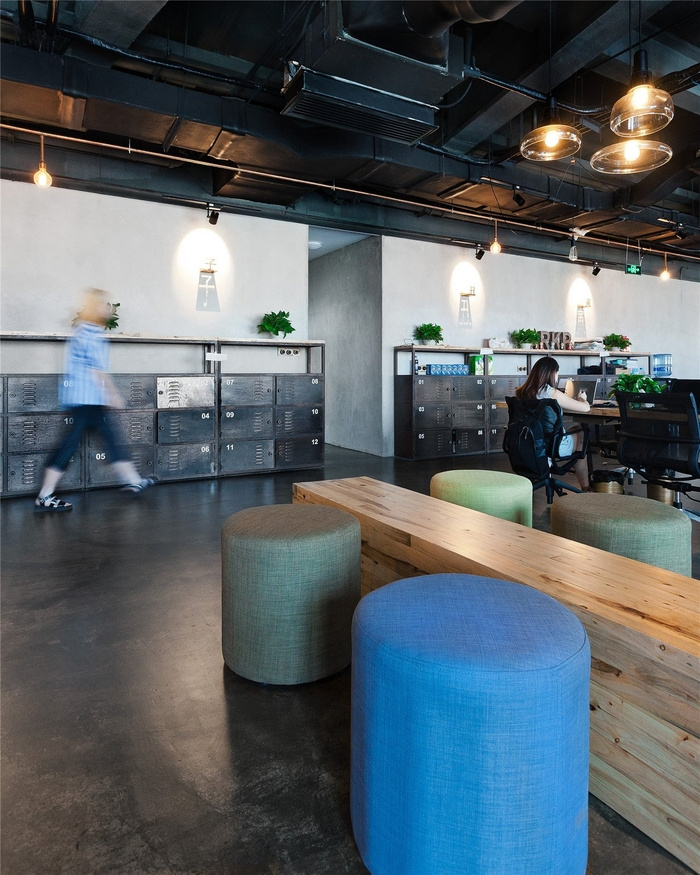 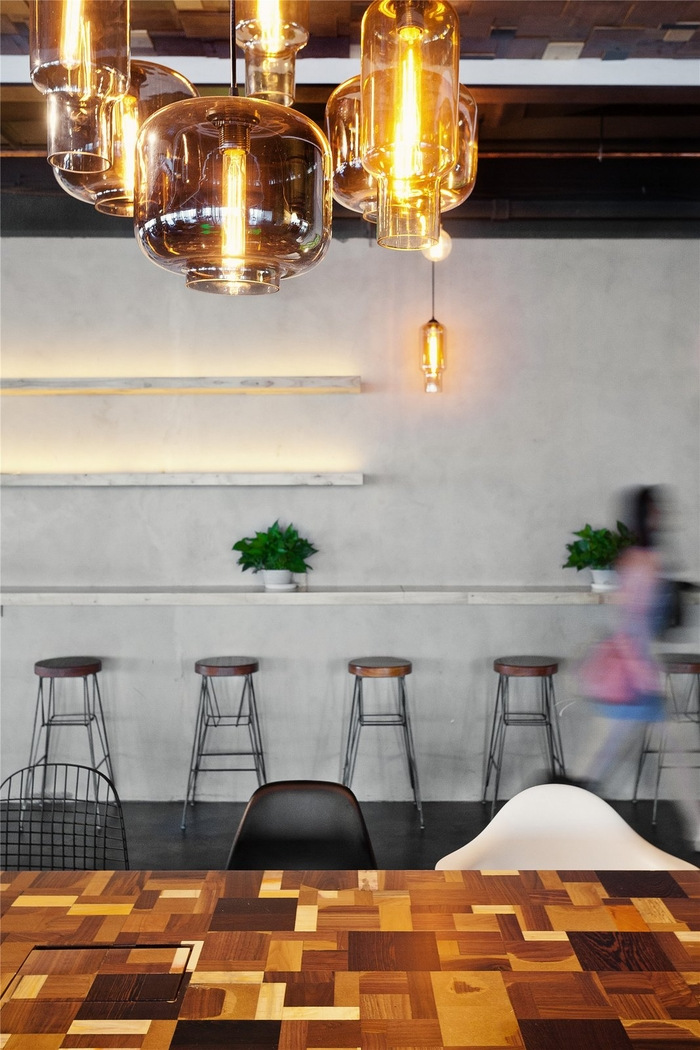 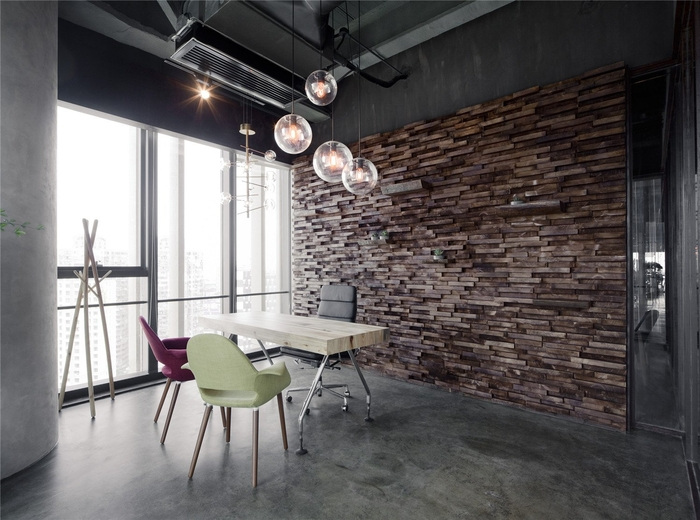 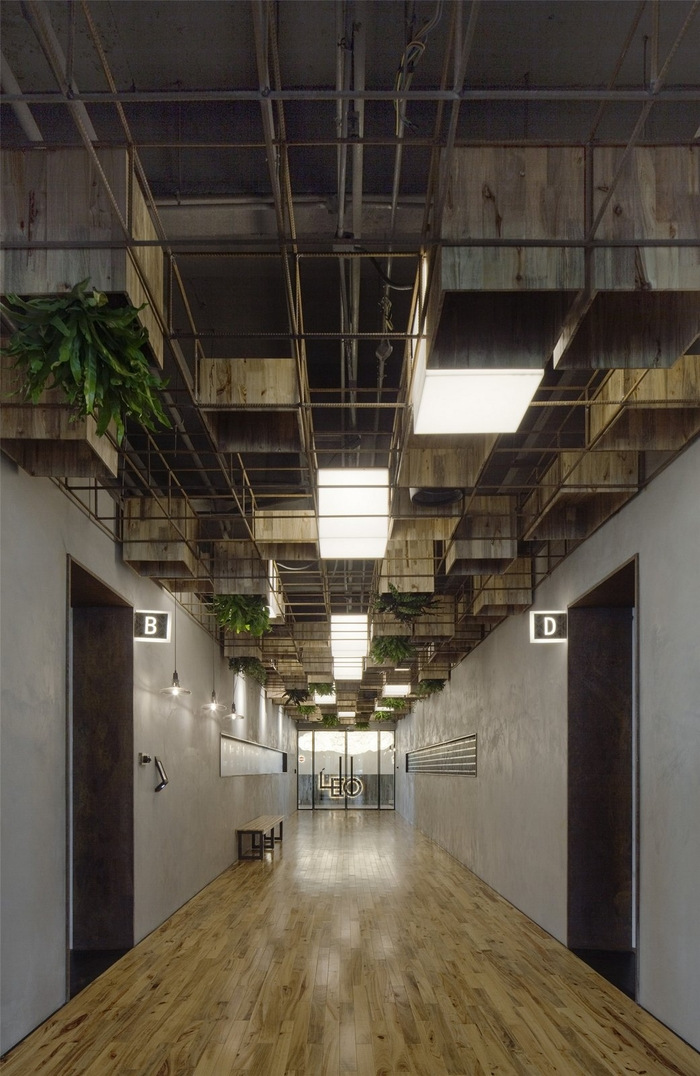 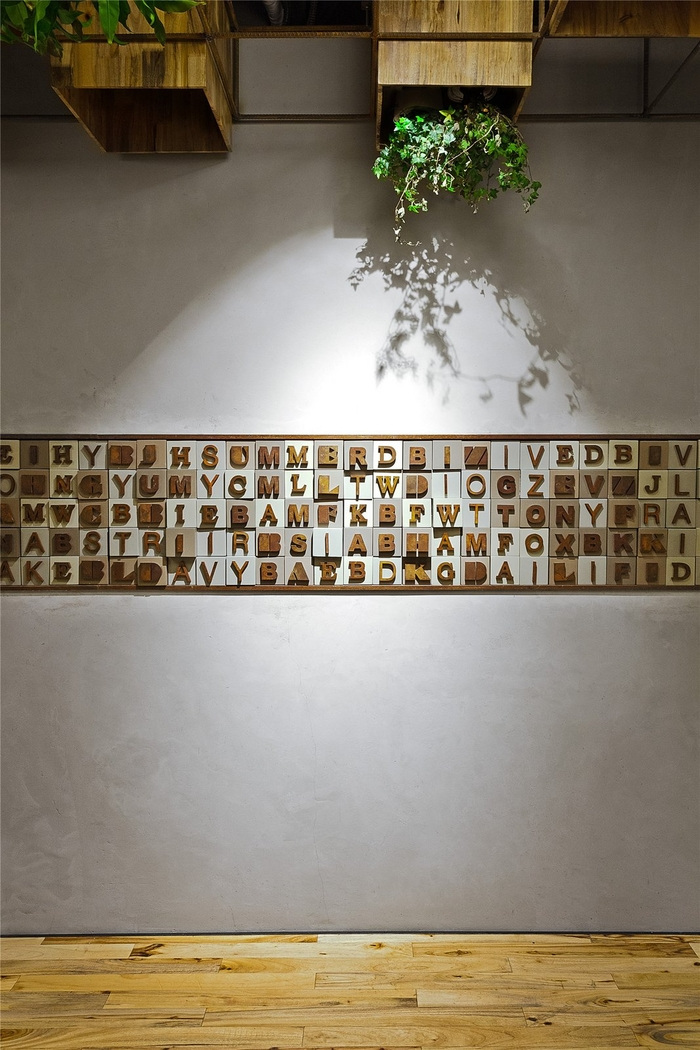 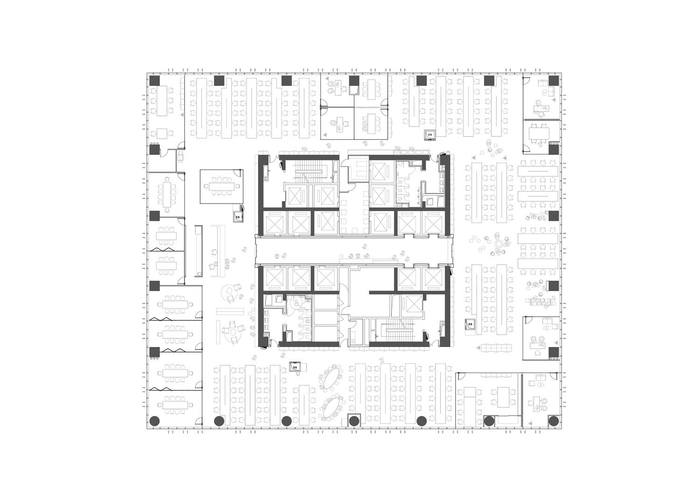 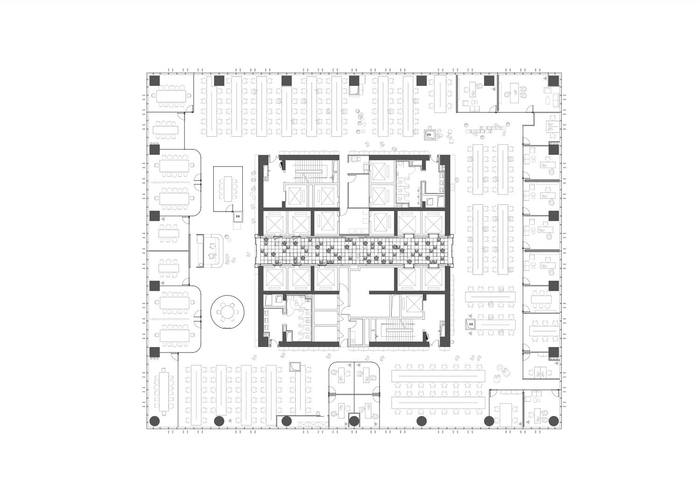